COLOMBO, Sri Lanka (CNN) -- The deafening roar of drums and horns rose as thousands of people took to the streets in Sri Lanka Friday for a victory parade marking the end of the decades-long civil war. 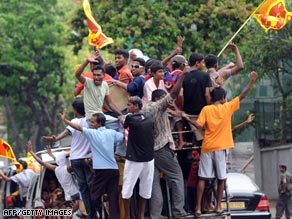 Sri Lankan youth celebrate on the street in Colombo on May 20, 2009.

Enthusiastic revelers danced in the street, carried yellow and red flags and some even carried hand-crafted puppets depicting the dead body of the leader of the rebel Tamil Tigers.

Sri Lanka's government declared victory Tuesday in the country's 25-year civil war against the Tamil Tiger rebels. The announcement brought celebrations to some parts of the country.

But while thousands partied Friday, humanitarian organizations worried about the estimated 250,000 refugees the war created in northeast Sri Lanka. Many have had their homes destroyed are struggling for food, clean water, emergency health kits, cooking pots and school supplies, relief agencies say.

A U.N. spokesman has said the country's government has not adequately helped refugees and has started to restrict U.N. relief agencies from providing aid.

"The process of national reconciliation we feel must be all inclusive so that in can fully address the legitimate aspirations of the Tamil as well as other minorities. It is important that the victory becomes a victory for all Sri Lankans," said Vijay Nambiar, a U.N. special envoy.

U.N. Secretary-General Ban Ki-moon is expected to visit the area this week.