BEIJING, China (CNN) -- If 63-year-old Chinese scholar Zhou Duo had his way, he would be on hunger strike on June 4, sitting quietly through the day at Purple Bamboo Park, 20 minutes' taxi ride from Beijing's Tiananmen Square. 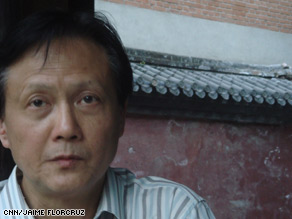 Zhou Duo wants to mark the 20th anniversary of the Tiananmen crackdown with a hunger strike.

His aim: to mark the 20th anniversary of the Tiananmen crackdown and to dramatize his defiant call for answers from Chinese authorities.

"What is the truth?" he pressed rhetorically, as he discussed his plans with CNN a week earlier. "How many people were in fact robbed of their lives? The truth remains unknown, because the Chinese government has suppressed information about the truth on June 4th."

On that day 20 years ago, Chinese troops in armored personnel carriers and tanks rumbled toward Tiananmen Square. That was where Zhou, along with three other intellectuals, including Taiwanese singer-composer Hou Dejian, were on the second day of a hunger strike to show solidarity with student protesters. The soldiers, on strict orders to clear Tiananmen Square of demonstrators, had forced their way through the city's main thoroughfare. Along the way, they met fierce resistance from students and city residents who barricaded the streets, so they fired at them. When the firing stopped, hundreds if not thousands of people lay maimed or dead.

A few hours past midnight on June 4, Zhou and the protesters on the square found themselves surrounded by troops and tanks, and yet several holdouts wanted to "resist till death." Sensing a sure bloodbath, Zhou and Hou appeased the hotheads and took control of their ranks. Gingerly, the two approached army officers and negotiated an agreement that allowed the demonstrators to withdraw peacefully. After they dispersed, some stayed home, some were arrested, and others became fugitives.

Three days later, Zhou went into hiding after he learned that the computer company he worked for as a policy planner had become the target of a witch hunt. Weeks later, police caught the bespectacled sociologist. He was detained but was not formally charged or tried. He was released months later.

"None at all," Zhou said firmly. "I would regret enormously if I hadn't done what I did and if hadn't saved the lives of so many people (on the square). This single reason is enough. Had I not done that, I would be hitting my head against the wall every day."

Despite the painful memories, Zhou said, he remains cautiously optimistic about how grassroots activism has grown in China.

"There is a huge difference now compared with 20 years ago," Zhou told CNN two weeks before the June 4 anniversary. "I think the citizens are becoming more aware of their rights. It's especially shown in the ranks of the NGOs (nongovernment organizations), lawyers and intellectuals. This is an important sign that the citizens' consciousness has waken up in China."

Accordingly, Zhou has sought to abide by laws and regulations. A week before the June 4 anniversary, Zhou prepared to drive to a police station to apply for a permit to conduct his day-long hunger strike. He wrote an application, even detailing that he would simply sit quietly in the park, carrying a banner that would read: "Publicize the truth of June 4 -- reach the goal of reconciliation of society!"

But Zhou did not even make it to the station. Police showed up at his home and talked him and his wife into going along with them for a "vacation" at a government-owned hostel. Reached by phone on June 3, Zhou's wife said good-naturedly: "We are both fine. We are having a good time teaching the police about democracy."

She said they expected to return to the city a week later, after the June 4 anniversary jitters had subsided.