Rem Koolhaas: The architect planning for the future 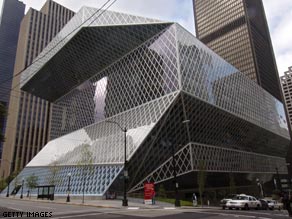 Seattle's Central Library is one of Rem Koolhaas' recent builds.

Responsible for the iconic CCTV headquarters in Beijing the Dutch architect was named one of "The World's Most Influential People" by Time magazine.

Similar to the man himself, his buildings are not afraid to make a statement.

"We felt it was very important for an entity like CCTV to make its presence felt... To generate a space and to define a space, that is the main thing," he told CNN at the opening of his "Transformer" building in Seoul, South Korea.

Koolhaas admits that the current economic climate is not particularly favorable to big and bold architectural plans, but from adversity comes creativity.

"Definitely there were a number of projects that we worked on put on hold, but on the other hand certain things were also accelerated because the price of construction is getting so cheap."

Despite these new parameters he remains optimistic that his profession will continue to invent and be relevant, "because it means kind of smaller, but more complex and kind of interesting things, kind of related to, not necessarily with commerce, but more connected to culture and to the social world."

His buildings have attracted worldwide fame and given Koolhaas himself a form of semi-celebrity status. Yet Koolhaas still feels a sense of unease being labeled a "Starchitect."

"I think it's a name that is actually degrading to the vast majority of people it is applied to. And it really is a kind of political term that for certain clients is important because they use star architects. My hope is that through the current complexity that title will exit discretely and disappear," he said.

He believes that by being able to respond to different demands architecture is evolving into something new.

"It is not possible to live in this age if you don't have a sense of many contradictory forces," he said.

"Each building has to be beautiful, but cheap and fast, but it lasts forever. That is already an incredible battery of seemingly contradictory demands. So yes, I'm definitely perhaps contradictory person, but I operate in very contradictory times."