Opinion: Toward a new security order in Northeast Asia

By Victor Gao
For CNN

Editor's note: Victor Zhikai Gao currently practices private equity consulting and serves as a director of the China National Association of International Studies. He was a former employee of China's Ministry of Foreign Affairs and served as interpreter for senior Chinese officials.

BEIJING, China (CNN) -- The test of a nuclear device on May 25 and the subsequent test missile-launches by North Korea have jolted the international community into universal condemnation of such flagrant violations of the relevant United Nations resolutions. Even China, North Korea's traditional ally, has expressed unprecedented firm opposition to such violations and has joined the United Nations Security Council in its resolution condemning such violations. 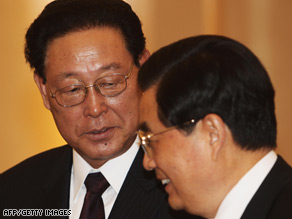 What will happen in the immediate future is still unclear, because the situation on the Korean Peninsula is still in great flux. However, the obvious truth is that no country can feed its people with nuclear weapons and missiles, and arming itself with nuclear weapons is against the fundamental interest of the people in North Korea. While the United Nations and the international community need to decide how to achieve denuclearization on the Korean Peninsula, it is time to reflect upon what will be the optimal scenario not only for the Korean Peninsula, but for Northeast Asia when the dust eventually settles, no matter how long it may take.

After all, this is the only region in the world which is still plagued by the shadows of the Second World War and the Cold War. Despite the elapse of several decades, a state of war still exists (or has not been brought to an official end) between North Korea and South Korea, and between mainland China and Taiwan. Russia and Japan still have a dispute over the four northern islands off the coast of Hokkaido. This region has the only country in the world, Japan, which was devastated by nuclear bombs. The Korean War pitched North Korea and China in a horrific war with South Korea, the United States, Japan, and many other allies of the United States.

It is encouraging that, despite the shadows of the Second World War and the Cold War, major positive changes have taken place in this region. The Soviet Union no longer exists, and mainland China and Taiwan have not only achieved a high level of economic integration (with bilateral trade surpassing US$100 billion in 2008), but are also experiencing political rapprochement, leading many people to believe that the Chinese on both sides of the Taiwan Strait will eventually embrace each other.

Relations between Japan and its neighbors are normal, with the exception of North Korea. Even North Korea and South Korea have had several rounds of hearty handshakes, in a mutual demonstration of endearment towards each other. For more than five years, the six-party talks injected a fresh breeze into international politics, giving hope to diplomacy rather than wars and conflicts.

This is why the nuclear explosion and the missile tests by North Korea couldn't have happened at a worse time. They have poisoned the overall atmosphere in this region by aggravating tension and conflict, and have undermined the global effort at nuclear disarmament and non-proliferation.

With the six-party talks in tatters and faced with such a highly explosive situation in Northeast Asia, we the people in this region need to make it loud and clear that the nuclearization of the Korean Peninsula will not be tolerated, and that we need peace and development rather than war and confrontation. Furthermore, we need to join hands in cleansing this region of the remaining shadows of the Second World War and the Cold War. As an end goal, we need to work together and eventually establish a new security order in Northeast Asia, which will, among other points, include the following:

Strenuous efforts need to be made and many miracles need to happen before this new security order in Northeast Asia can become a reality. However, the people in this part of the world share many common heritages, including Confucianism, Buddhism, and thousand years of cultural and economic exchange and learning from each other.

We should draw inspirations from the French people and the German people after the Second World War, and bury the hatchet and build lasting peace and goodwill with each other. The people in this region possess enough wisdom and courage to tear down man-made barriers and move onto lofty heights by creating enduring peace in this region, thus making greater contribution to world peace and development.

While our immediate challenge is to achieve denuclearization on the Korean Peninsula, it is time to think about prepare for a new security order in Northeast Asia, which will contribute to peace and development not only within this region, but in the world as a whole.