Hans, Uyghurs suffer in Urumqi: How to heal the wounds?

BEIJING, China (CNN) -- One of the results of the ethnic unrest in China's far-western city of Urumqi last Sunday is how difficult it will be to heal the wounds. On both sides of town you have people who suffered and who are still suffering -- whether they are Han Chinese or Uyghurs. 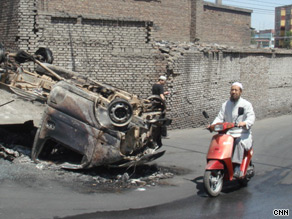 A Muslim motorcyclist drives by a charred car in Urumqi. July 9, 2009.

I visited the Xinjiang People's Hospital on Wednesday with about 200 other representatives from the local and international media.

From July 5, soon after the outbreak of the unrest, to about 2 p.m. on July 8, when we were visiting, this hospital received 367 patients from that rioting: 240 of them with moderate to light injuries and the rest with very serious injuries -- 41 critically injured -- and 18 were dead on arrival.

Doctors here performed 70 surgeries. Most victims suffered from injuries caused by blunt weapons, hospital officials said. A few were shot. A doctor could not tell us what kind of guns may have been used. He said many victims had suffered head injuries, broken bones and ribs.

Then we visited a ward. There was one woman who said she was in her store when the rioters barged in. She hid under her bed; they pulled her out and pounced on her. Her face is still black and blue.

When I walked in, she was having a session with a psychotherapist. She was recounting what happened. Her husband was also there; he had a minor head injury. The couple came from Sichuan province and had moved to Urumqi to start a business. She said the rioters were mostly young men.

"I hid under the bed when the rioters barged into our shop," said the woman. "They dragged me out and beat me up with sticks." She believed she was lucky she came out alive.

I spoke with the psychotherapist who said it was natural for patients like the woman to suffer trauma. She told the woman it was normal to have post-traumatic symptoms; that maybe sometimes she would speak to herself, be irritable, uptight or anxious.

Her main advice was to recognize that this is all normal, it takes time and it is important she keeps on talking to people about what she went through.

I spoke with a few other patients. One man happened to be on the public bus driving through the streets where the riots took place. He said the rioters pulled down the driver, and he and other passengers were also beaten up.

Also in the hospital was a police officer, who was being examined. He said he was surrounded by some rioters while on duty, and they pounced on him and beat him up. He had some head injuries and was getting Intravenous drip.

So that is one side of the story.

On Thursday, we visited a Uyghur neighborhood. There was a police presence in strategic intersections, but they were not all over the place.

We saw residents coming out for a walk -- some shopping, some in motorized carts that served as taxis, and some boys running around.

Then we drove into the neighborhood called the horse racing area (a long time ago there was a horse racing track). It is neighborhood heavily populated by Uyghurs. This is a few kilometers away from the People's Square and the Great Bazaar where the protests deteriorated into racial rioting.

There was evidence that the violence was not just confined to those two places and had, in fact, spread to areas such as this one. Along the way, we saw a lot of carcasses of burned vehicles -- cars and vans -- some upside down, some still in the middle of the road.

In another part of the neighborhood, we saw a car dealership, selling Volkswagen Santana sedans. Some cars were charred; some brand new cars had their windshield and windows smashed in. A police cordon hung in front of it so people could not get in.

Just across the street was another place where authorities had impounded 200 vehicles burned or badly damaged during the rioting. We saw more cars being towed into the compound, which was manned by a police officer and a few civilians. We saw a group of civilians trying to walk in to retrieve valuables from a vehicle. They were told a police investigation was ongoing and they couldn't get in.

We next walked into a neighborhood where there was a typical farmers' market. They were almost all Uyghurs. It was a Uyghur neighborhood on both sides of a narrow road, where a traditional Uyghur bazaar stood with 50 to 60 stalls and shops selling naan bread, kebabs, melon, baked chicken, nuts and freshly cut lamb. One man sold ice, and there was a tea house. See a map of Xinjiang

I didn't see any police presence in the vicinity. The residents live in side streets, in one-to-three story houses. We stopped and spoke with some Uyghur women. A girl with them answered my questions in Mandarin. She said they were anxious, they were worried, and they hoped that they would all live like a big family in Urumqi. She said they hoped that the situation would normalize and they did not like what happened -- they opposed violence, they said.

We also spoke with a 9-year-old boy who lives alone in the neighborhood. His parents are divorced and so he, an only child, lives with his father. Two days earlier, however, police swooped down their neighborhood and took away his father, along with scores of men suspected of committing violence during the Sunday rioting.

"Things are in a mess now," he said in halting Mandarin. "Our life is ruined." He said he hoped his father would be released soon.

Wounds are still raw, even for residents who were only vicariously affected by the ethnic feuding.

Walking in the Great Bazaar on Wednesday, I met a young Uyghur man who worked for an international retail chain. He did not want to talk on camera, but he told me he felt sad about what had happened. He is obviously a beneficiary of the modern changes that Urumqi has seen the past several years. He said it was never like this before. He thinks both sides need each other. He hopes that people in Urumqi can live harmoniously even though they have differences.

He said a fellow employee -- a deaf-mute Uyghur -- was caught in the rioting, apparently not aware of what was happening and then beaten in the ensuing violence. He had just visited her in the hospital. He was worried about his parents who lived in a Uyghur neighborhood, as they were about him. He was walking in a Uyghur area that was half-deserted on this day with most of the shops still closed. "It's a shame," he says. "Things were looking up here."