JAKARTA, Indonesia (CNN) -- Indonesian police have recovered a laptop they believe belonged to one of the bombers of Friday's hotel attacks in Jakarta, the country's official news agency said Sunday, although police would not confirm the report to CNN. 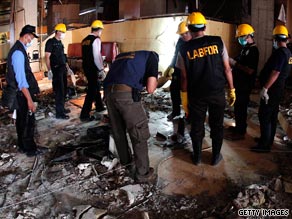 However, Laksana told CNN that he could not confirm the report.

Antara News Agency, quoting Laksana, reported that the laptop contained information and codes that the attackers may have used to communicate with each other.

The blasts at the Ritz Carlton and JW Marriott killed nine people -- including at least two presumed suicide bombers -- and wounded more than 50.

Anti-terrorism officials are investigating the links between the attacks and Noordin M. Top, the suspected leader of a small Jemaah Islamiyah splinter group. The group has ties to Osama bin Laden's al Qaeda terrorist network, but so far there has been no claim of responsibility for the latest attack.

Top is reportedly an officer, recruiter, bomb-maker, and trainer for the group, which was involved in a previous attack on the Marriott -- in August 2003 -- as well as attacks on a Bali nightclub in 2003 and the Australian embassy in Jakarta in 2004, according to the FBI.

Among the victims who have been identified by Indonesia's health ministry, two were Australian, and one each from New Zealand, Singapore and Indonesia.

Among the wounded were six U.S. nationals, according to the State Department.

Watch how the Indonesian soccer team narrowly misses the blast »

On Sunday, Australian Prime Minister Kevin Rudd confirmed one of the victims, saying Garth McEvoy was the first government official to be killed by a terrorist attack in the line of duty.

Closed-circuit television footage from the Marriott shows a man, sporting a baseball cap and pulling a wheeled suitcase, heading toward the hotel's lobby-level restaurant seconds before the deadly blast.

Didik Ahmad Taufik, the Marriott's security supervisor, told reporters Saturday that a man, matching the image on the security camera footage, was walking "awkwardly" into the hotel's restaurant about 30 minutes before the blast.

The man told Taufik he was at the hotel to deliver an item to his boss.

Taufik said he asked a security guard to accompany the man as he made his delivery.

"But unluckily, a few minutes after that, I heard an explosion and was hit by debris from the ceiling," Taufik said, according to Antara.

One of the suspected bombers had been staying at the hotel since June 15, he said.

The bombings at the two luxury hotels -- which are connected by an underground tunnel -- happened shortly before 8 a.m. (9 p.m. Thursday ET). Both blasts struck the hotels' restaurants.

The hotels are frequented by international visitors and many foreign nationals.