NEW DELHI, India (CNN) -- At least 441 people have died in floods in India from this season's monsoon rains, federal authorities said in their latest report. 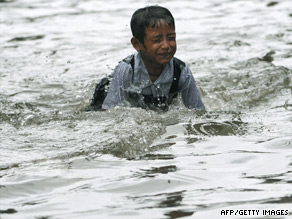 An Indian child plays in a flooded street in Mumbai earlier this month.

Flooding has affected more than 1.5 million people in parts of India, said the disaster management division of the federal home ministry.

The country's main weather office has warned of more heavy rain in western and central parts of India.

Monsoon rains sweep across the subcontinent from June till September. Though they bring much-needed relief to often-parched farmlands, they also leave a trail of landslides, home collapses and floods that can kill.