BANGKOK, Thailand (CNN) -- North Korea launched a scathing personal attack on U.S. Secretary of State Hillary Clinton on Thursday after she likened the leadership in Pyongyang to "small children and unruly teenagers and people who are demanding attention." 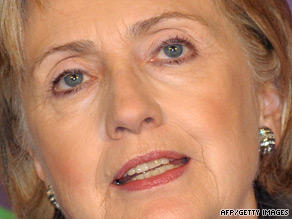 "Sometimes she looks like a primary schoolgirl and sometimes a pensioner going shopping," the statement said. Read other colorful insults by N. Korea

The verbal tussle between the two countries culminated with the reclusive communist state making it clear that six-party nuclear talks, stalled for over a year, were effectively finished.

Clinton had earlier warned that North Korea's refusal to discuss its nuclear program could escalate tensions and provoke an arms race in northeast Asia.

"I was gratified by how many countries from throughout the region spoke up and expressed directly to the North Korea delegation their concerns over the provocative behavior we have seen over the last few months," Clinton said at a meeting of southeast Asian nations in Phuket, Thailand.

Her remarks came after the North Koreans issued their blunt statement in response to Clinton's interview earlier in the week with ABC News.

Before Clinton's remarks in Phuket on Thursday, the North Korean delegation attempted to take the podium to speak to the media. But it was turned away by security guards.

North Korea tested a nuclear device in May and fired seven ballistic missiles earlier this month in defiance of a U.N. resolution.

At the Association of Southeast Asian Nations meeting, Clinton said she had unanimous support for U.N. Resolution 1874, passed by the Security Council in June. It tightened sanctions on North Korea, imposing an embargo on the shipment of arms from that nation.

The North protested the resolution by saying it would enrich uranium and weaponize plutonium, according to KCNA. When enriched to a high degree, uranium can be used as weapons-grade material. Plutonium can be used in atomic bombs.

Clinton said the United States will continue to push North Korea to come to the table. She said a "full normalization of relationships" was possible if North Korea agreed to a verifiable dismantling of its nuclear program.

"The United States and its allies and partners cannot accept a North Korea that tries to maintain nuclear weapons, to launch ballistic missiles or to proliferate nuclear materials," Clinton said. "We are committed to the verifiable denuclearization of the Korean peninsula in a peaceful manner."

The United States has also expressed concern that military cooperation between North Korea and Myanmar could destabilize the region.

CNN's Dan Rivers contributed to this report from Bangkok, Thailand.

All About North Korea • U.S. Department of State • Hillary Clinton