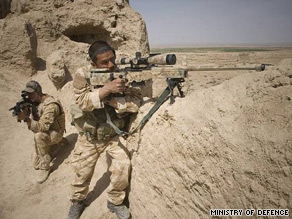 A file image shows a British Royal Marine sniper team on an operation in Afghanistan.

NATO and its Afghan allies launched Operation Panther's Claw to flush the Taliban from parts of southern Helmand Province before Afghan presidential elections next month.

Major fighting is mostly over, and the military will now focus on "holding" the areas that have been cleared of Taliban so they do not return, Lt. Gen. Simon Mayall said in a briefing. The operation's success will enable up to 80,000 people in Helmand to vote.

"Panther's Claw has been extremely successful," said Brigadier Tim Radford, the top British military commander for the operation. "There will be many Taliban who will not be fighting any more."

He said the Taliban suffered "significant casualties," but refused to say how many. Nine British troops were killed in action in the operation, he said, and there were three Afghan civilian casualties.

Radford estimated that there were 450 to 500 Taliban fighters in the area at the time of the operation, which he called "one of the biggest that has taken place."

The British gave several weeks' warning that they were planning to attack, he said, both to exert psychological pressure on the Taliban and to give civilians a chance to flee.

Mayall, the deputy chief of the British Defence Staff for Operations, said the challenge now was to convince local people that the Afghan government and its allies could protect them from the Taliban.

The Taliban "are going to assume that we are going to lose interest and move on," he said.

But they are wrong, he said.

NATO forces were going to "stay in Afghanistan for a very long time," he said, adding that active NATO-led fighting should "tail off" as Afghan security forces develop the ability to fight the Taliban themselves.

The counter-insurgency strategy of clearing and holding an area to allow for development of infrastructure and the rule of law echoes the coalition forces' plan in Iraq.

Panther's Claw focused on the area around the town of Babaji in Helmand Province.

The operation mirrored a similar operation by U.S. Marines in the area.

At least 20 British troops have been killed in Afghanistan this month, sparking intense debate in Britain about the country's military role there.

The British-led operation involved about 3,000 troops -- mostly from the British military but also with Afghan, Danish and Estonian forces, the British Ministry of Defence said in a written statement. The operation started in mid-June with an air assault along a canal about 16 kilometers (10 miles) north of the city of Lashkar Gah, the ministry said.

British-led forces attacked from three different directions over the next three weeks, essentially creating a "gated community" where Taliban insurgents could not get in or out, Radford said.