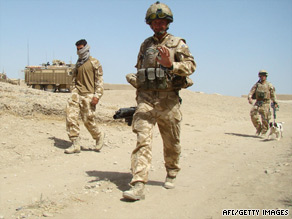 British soldiers patrol in Baba Ji district of Helmand province last month after retaking it from the Taliban.

Sunday's three dead were Americans killed in the eastern part of the nation by homemade explosives and gunfire in battle, according to a spokeswoman for NATO's International Security Assistance Force.

Two ISAF soldiers died in an explosion in Kandahar province Saturday, she said.

NATO did not release their nationalities, but the Canadian military said in a statement Sunday the two were Canadian.

They were killed when a bomb detonated near a patrol in the Zhari District, about 15 kilometers ( 9 miles) west of Kandahar on Saturday, the military said. A third Canadian soldier was injured.

Three Americans were killed by explosives in Kandahar province the same day, and a French soldier was killed in battle in Kapisa province.

At least 75 NATO troops died in Afghanistan in July, the highest monthly toll since the war began in October 2001. Also, the number of British dead in Afghanistan has topped the United Kingdom death toll in Iraq.

The latest deaths come as an influential group of British lawmakers criticized NATO's mission in Afghanistan.

The lack of a unified vision and strategy is jeopardizing the military alliance's reputation, a House of Commons committee said in a report released Sunday.

And, the lawmakers said, the British government should refocus its objectives in Afghanistan and concentrate on one priority: security.

Britain has moved away from its initial goals of counter-terrorism in Afghanistan and has started working on areas it isn't able to handle alone, the Foreign Affairs Select Committee said in the report, which examines security in Afghanistan and Pakistan.

Focusing on security is the only way that Britain and its allies will achieve long-term stability in Afghanistan, the report said.

"The U.K. has experienced mission creep from its initial goal of supporting the U.S. in countering international terrorism, far into the realms of counter-insurgency, counter-narcotics, protection of human rights and state building," committee chairman Mike Gapes said.

"It is clear that despite the commendable efforts of the [British Foreign Office] in adopting a broad-ranging, holistic approach to tackling narcotics in Afghanistan, success in that area depends on a range of factors which lie far beyond the control and resource of the U.K. alone."

Watch a British soldier speak out against the war »

The committee recommends that the United Nations and the NATO force in Afghanistan, ISAF, join with the Afghan government to take over counter-narcotics operations from Britain.

Security in Afghanistan "will remain precarious for some time to come," but the international community must not abandon Afghanistan, the report said.

Britain and its allies must allocate responsibilities and do a better job of sharing the burdens to prevent insurgents from taking over, it said.

Watch the father of a British serviceman killed speak out »

"The international community needs to convey publicly that it intends to outlast the insurgency and remain in Afghanistan until the Afghan authorities are able take control of their own security," Gapes said. "This must be the primary objective."

The Foreign Affairs Committee scrutinizes the spending and policy of the British Foreign Office. Committee members come from the three major parties in the British Parliament.