(CNN) -- Two U.S. journalists who had been detained by North Korea were traveling back to the United States with former President Clinton hours after being pardoned, a Clinton spokesman said. 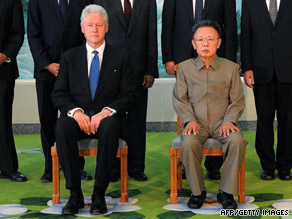 "They are en route to Los Angeles [California] where Laura and Euna will be reunited with their families," said spokesman Matt McKenna.

Doug Ling, Laura's father, reacted to the news outside his home in Carmichael, California, with, "One of the best days in my life ... I figured, sooner or later, they'd be back."

In Los Angeles, family friend Welly Yang said the Ling family had "done everything they could, while respecting the North Korean government, to try and get Laura home."

He predicted that Ling would remain a journalist. "Despite this terrifying experience, I can't imagine that Laura would give up her passion to tell stories that otherwise wouldn't be heard."

Their release Wednesday came after Clinton met with top government officials in Pyongyang.

"Clinton expressed words of sincere apology to Kim Jong Il for the hostile acts committed by the two American journalists against the DPRK after illegally intruding into it," the news agency reported. "Clinton courteously conveyed to Kim Jong Il an earnest request of the U.S. government to leniently pardon them and send them back home from a humanitarian point of view.

"The meetings had candid and in-depth discussions on the pending issues between the DPRK and the U.S. in a sincere atmosphere and reached a consensus of views on seeking a negotiated settlement of them."

The report said Clinton then conveyed a message from President Obama "expressing profound thanks for this and reflecting views on ways of improving the relations between the two countries."

But White House spokesman Robert Gibbs told reporters in Washington before the announced agreement that Clinton was not carrying any message -- written or oral -- from Obama.

Gibbs added that the former president last spoke with Obama during a White House visit in March. He described Clinton's trip as a "solely private mission to secure the release of two Americans."

The report from the Democratic People's Republic of Korea, the nation's official name, described the agreement to release the journalists as "a manifestation of the DPRK's humanitarian and peace-loving policy.

"The DPRK visit of Clinton and his party will contribute to deepening the understanding between the DPRK and the U.S. and building the bilateral confidence."

The women were arrested in March while reporting from the border between North Korea and China for California-based Current Media and sentenced in June to 12 years in prison on charges of entering the country illegally to conduct a smear campaign. Because the United States has no diplomatic relations with North Korea, efforts to resolve the issue had been handled through Sweden, which represents U.S. interests in Pyongyang.

"We want to thank the Obama administration for its continuous and determined efforts to achieve this outcome, and President Clinton for his willingness to undertake this mission," Current Media co-founders Gore and Joel Hyatt said in a written statement.

"All of us at Current are overjoyed at Laura and Euna's safe return. Our hearts go out to them -- and to their families -- for persevering through this horrible experience."

Clinton's mission came as the United States and its allies in the region are seeking to persuade North Korea to return to nuclear disarmament talks, which have stalled. North Korea conducted its second nuclear bomb test in May and has conducted several missile tests since. The United Nations has responded to those tests by tightening and expanding sanctions on the nation.

North Korea and the United States were on opposite sides in the 1950-1953 Korean War and had no regular contacts before a 1994 crisis over North Korea's nuclear program. North Korea agreed then to halt the development of nuclear weapons but abandoned that accord and withdrew from the Nuclear Non-Proliferation Treaty in 2003.

Former President Clinton had considered visiting North Korea in 2000 near the end of his second term as president. His secretary of state, Madeleine Albright, had gone to Pyongyang in early 2000 to meet with Kim.

The 67-year-old North Korean leader is widely reported to have suffered a stroke a year ago and is believed to be grooming his youngest son, Kim Jon Un, as his successor.