Behind the scenes: A refugee camp for Pakistani Christians

In our Behind the Scenes series, CNN correspondents share their experiences in covering news and analyze the stories behind the events. CNN's Cal Perry reports on a refugee camp in Islamabad, Pakistan. 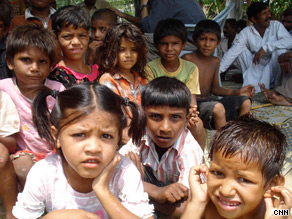 Children at the camp are in danger of dehydration, says a doctor who visited the refugees with CNN.

ISLAMABAD, Pakistan (CNN) -- They are not war refugees, not displaced by violence; rather they believe they're here because they are Christian.

A mother of two sobs as she tells us, "I have no money. No money for books or uniforms to send my children to school." It's around 110 degrees Fahrenheit in this squalid camp in downtown Islamabad, where 2,000 Christians have settled, literally in the middle of the road.

The Christian population of Pakistan is only 5 percent of the overall population. Overwhelmed by a Muslim majority, at times they face violent attacks. Other times, they believe they're expelled from their lands -- faced with a distant and dark future.

This group has ended up living in tents for the past 3 months.

They say the government kicked them off their land without warning: only because they are Christian. The government tells a different story, saying that they were given plenty of warning. Further than that, they say they will take care of this problem, a problem they are well aware of.

The minister of minority affairs, Shahbaz Bhatti, says, "We are constitutionally bound to protect the life and property of the minorities and to look after the interests of the minorities in this country. Because they played a role in the founding, they are equal citizens of the country. Yes, there is a problem, but we are trying to solve those problems."

The truth is, regardless of any religious strife, people are dying of poverty in this camp. Two have died since the group settled here, and children lay in the sun, totally exposed to the sun, suffering slowly. We brought a doctor to the camp; he seemed stunned, both at its location and the conditions.

"I think there's a danger here, especially with some of the younger children, that they could just die from dehydration or from all kinds of infections," says Dr. Rixwan Taj. "I am very surprised, really because this is the center of Islamabad, just right in the center. And every facility is not but 10 minutes from here."

The water the camp is using to survive on is a broken pipe that runs underneath the road and out one side. At the camp, the water is used for drinking and washing. It happens to run over a pile of trash and directly down into the makeshift toilets, which are two holes in the ground. Taj tells us the obvious: Typhoid will come to this camp -- the conditions are ripe.

Other countries of course deal with religious strife; minorities all over the world face an uphill struggle. But here, with the addition of poverty, in the oppressive heat -- in an over-crowed camp on the side of the road in downtown Islamabad -- it seems that much worse.

Heaven seems a long way off.

All About Pakistan • Christianity