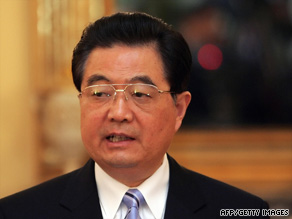 "The key to our work in Xinjiang is to properly handle development and stability," said Hu.

Hu, calling for reform, development, ethnic unity and stability in the region, expressed gratitude to the armed forces, militia and police for their work in quelling the July 5 ethnic riots in Urumqi, the capital of China's remote northwestern Xinjiang Autonomous Region, Xinhua news agency said.

The riots were between Uyghurs, who are predominantly Muslim, and ethnic Han Chinese, the majority group in China. Reports of deaths range from around 200 to many more.

Hu, who is also general secretary of the Communist Party of China Central Committee and chairman of the Central Military Commission, said Xinjiang must focus on economic development, maintaining social stability, and promoting ethnic unity and common prosperity.

During a tour that began Saturday and ended Tuesday, Hu visited villages, farms, communities, factories and barracks in the largely Uyghur area of Aksu; Changji, a land port between China and Central Asian nations; Karamay, an oil base; Shihezi, the headquarters of the Xinjiang Production and Construction Corps; and the regional capital of Urumqi.

Hu met with military personnel, hospital workers, local officials and religious leaders and with the widow of a policeman who was killed July 5 by rioters in Urumqi. He promised her family members government help if they should need it.

Hu told villagers and herders that ethnic minorities would be supported through "more efficient measures."

"In the future, Xinjiang's development will be better and faster," he said, according to state-run CCTV. "The improvement of people's lives will be even more remarkable; let's work together to create an even better future."

He said the central government "attaches great importance to the well-being of ethnic groups" and called the riots "a serious criminal act masterminded by separatist forces at home and abroad."

Hu added that all separatist forces are doomed to failure, and said the central government would support social and ethnic development, CCTV reported.

Reports on Monday from state-run China Daily said that more than 200 people charged in connection with the riots could be tried this week.

Problems in the region began in late June, after two Uyghur migrant workers at a toy factory in Guangdong province were killed in a brawl between Uyghurs and Han.