(CNN) -- Fiji has been suspended from the Commonwealth after its military rulers failed to respond to a demand to restore democracy in the Pacific island nation, the organization said Tuesday. 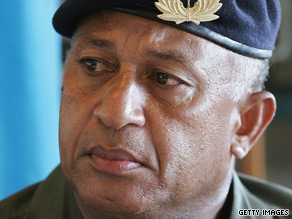 Commodore Frank Bainimarama seized power in Fiji in a 2006 coup.

"This is an announcement I make with deep regret -- it is a step the Commonwealth is now obliged to take, and one that it takes in sorrow," Commonwealth Secretary-General, Kamalesh Sharma, said in a statement.

The 53-nation group gave Fiji's leadership a September 1 deadline to announce democratic elections for next year.

In May, Fiji was expelled from the Pacific Forum after failing to meet a similar deadline set by the 16-nation bloc.

Commodore Frank Bainimarama, who seized power in a 2006 coup, has repeatedly insisted the next election year in Fiji will be in 2014. He has vowed to reform the country's electoral system and eradicate the "endemic corruption."

Elaborating on the implications of "full suspension", Secretary-General Sharma said Fiji would lose its Commonwealth aid and will not be allowed to participate in the 2010 Commonwealth Games.

It has already been banned from Commonwealth ministerial meetings.

However, Sharma left the door open to future dialogue about the restoration of constitutional democracy in the country.

"I welcome the invitation from Commodore Bainimarama to meet my Special Representative in Fiji in September, and look forward to continuing my good offices engagement to promote adherence to Commonwealth principles and the welfare of the people of Fiji", he said.

The Commonwealth is made up of 53 former British colonies that co-operate within a framework of common values and goals.