Whistle-blower: Contractor mischief in Kabul 'over the top'

(CNN) -- A whistle-blower who helped shed light on misconduct among the ranks of contractors working as guards for the U.S. Embassy in Afghanistan is back home in England sooner than he expected after he resigned in the fallout of the scandal. 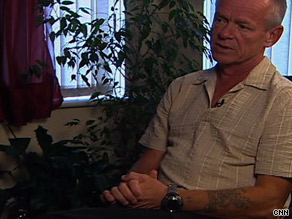 "It was just downright stupid," Terry Pearson says of guard misconduct in Afghanistan.

Terry Pearson, who worked as an operations manager for contractor R.A. International at Camp Sullivan in Afghanistan, said he witnessed mistreatment among the guards employed by ArmorGroup North America, who were housed at the camp.

"It was just downright stupid, some of the things they were doing," Pearson told CNN. "And insensitive."

Allegations surfaced last week that contractor ArmorGroup allowed mistreatment, sexual activity and intimidation within the ranks of private guards hired to protect the embassy in Kabul. The company and U.S. officials are investigating.

Fourteen guards were fired and the entire management team for ArmorGroup in Kabul was to be replaced, the U.S. Embassy in Kabul said.

The actions of the embassy guards went beyond pranks or laughs, he said.

"When you start encouraging people to drink alcohol running off someone's body parts," Pearson said, pausing for a moment, "a bit over the top."

He took his grievance to his superiors as well as those of ArmorGroup.

The answer he received was, "'they're just letting off steam,' and I think that's the way they looked at some of the incidents that happened," Pearson said.

Pearson said he was looking for a change of behavior, not for mass firings.

But at Camp Sullivan, he was made to feel that he had done something wrong and he resigned.

Pearson said he reconsidered the resignation almost immediately after he submitted it, but it was too late.

"Although we are now aware of the alleged events at Camp Sullivan ... the employee's resignation was not associated with this matter," R.A. International said in a statement.

The scandal came to light last week when the watchdog group Project on Government Oversight sent a letter to Secretary of State Hillary Clinton and briefed reporters on its findings, which it said were based on e-mails and interviews with more than a dozen guards who have worked at the U.S. compound in Kabul.

Speaking with CNN at his hometown of Liverpool, England, Pearson said that given a chance to go back, he would have taken the same stance.

"Dignity at work and respect at work is more important than having a job yourself," he said.

All About U.S. Embassy in Afghanistan • ArmorGroup International plc