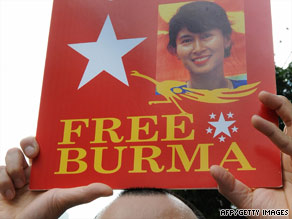 Burmese shout slogans during a demonstration in Tokyo on August 23.

The Yangon Divisional Court said it would announce its decision on October 2. Suu Kyi, 64, remains under home confinement and was not in court.

Meanwhile, the government said it was releasing 7,114 prisoners Friday from prisons across the country for "good conduct and discipline."

In an unusual move, it invited journalists to witness and film the prisoner release at Yangon's Insein Prison, a maximum-security facility.

Among the released prisoners were opposition party prisoners, some ex-military officers and two journalists who were arrested after assisting victims of Cyclone Nargis in May 2008.

Human Rights Watch estimates there are 2,100 political prisoners in Myanmar, which is also known as Burma. Suu Kyi, a Nobel Peace Prize laureate, is the best known, after having spent 14 of the past 20 years under house arrest.

Exiled journalist Aung Zaw told CNN that the amnesty was the ruling junta's tactic for diverting attention from the high-profile Suu Kyi. The U.N. Security Council has expressed "serious concern" over her conviction and the European Union adopted additional sanctions against Myanmar. World leaders including U.S. Secretary of State Hillary Clinton have criticized her treatment.

Aung Zaw, who founded the independent magazine Irrawaddy, said chances were slim that the court would release Suu Kyi or reduce her sentence.

"The regime wants to prevent her from participating in the 2010 elections," he said from Chiang Mai, Thailand. "This government is very manipulative."

Suu Kyi is the leader of the National League for Democracy (NLD) opposition party and has become the iconic face of democracy in her homeland.

Her latest sentence stems from an incident last May, in which an uninvited American man swam to her home. The man, John William Yettaw, was sentenced to hard labor but was later released after U.S. Sen. Jim Webb traveled to Myanmar and intervened in his case.

Suu Kyi was found guilty of breaching the terms of her existing house arrest. She was initially sentenced to three years in prison, but the head of the military junta later commuted it to 18 months of home confinement.

Her two sole companions in her heavily guarded residence also were sentenced to 18 months of house arrest, to be served alongside Suu Kyi.

The opposition leader told the court she didn't know Yettaw, was unaware of his plans to visit, and didn't report his intrusion because she didn't want him to get in trouble.