BANGKOK, Thailand (CNN) -- Tens of thousands of protesters gathered in Bangkok, Thailand, on Saturday to mark the third anniversary of a military coup that ousted Prime Minister Thaksin Shinawatra. 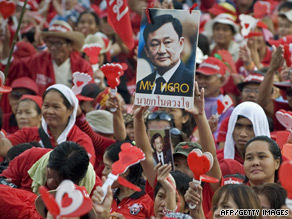 Red-shirted demonstrators hold up a picture of Thaksin Shinawatra at Royal Plaza in Bangkok.

About 30,000 protesters, who wore red shirts in support of Thaksin, gathered in the country's capital near the Government House, said police Lt. Gen. Tritote Ronnarithvichai. The crowd was calm and there was no sign of violence, he said.

The demonstration was expected to end by midnight.

Thaksin, who served two terms as prime minister, was ousted in a bloodless coup in 2006 while he was in New York attending a United Nations summit.

He remains well-liked among people in northern Thailand because of his populist policies.

Separately on Saturday, members of the People's Alliance for Democracy, an anti-Thaksin group, clashed with local residents in the northeastern province of Sisaket, near the disputed Preah Vihear border with Cambodia, government spokesman Panitan Wattanayakorn said.

The national Thai News Agency reported that PAD members, who were opposing Cambodian construction in the contested area, broke through barricades to march toward the ancient Preah Vihear temple and clashed with local residents who opposed the march.

The two sides "used catapults and sticks to hurt each other" before Thai police separated them.

"A number of villagers were reported injured in the clash," the news agency said.

Both Cambodia and Thailand lay claim to the 11th century temple. It sits atop a cliff on Cambodian soil but has its most accessible entrance on the Thai side.

The issue reignited last summer after the United Nations approved Cambodia's application to have the temple listed as a World Heritage Site, places the U.N. says have outstanding universal value.

Some in Thailand feared the decision would make it difficult for their country to lay claim to disputed land around the temple.

All About Thaksin Shinawatra • Thailand • Cambodia