NATO chief: We must succeed in Afghanistan

NEW YORK (CNN) -- More resources and personnel are needed to train Afghan security forces so they can become "masters in their own house," NATO's secretary-general said Tuesday. 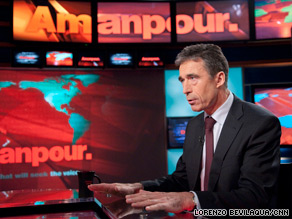 NATO chief Anders Fogh Rasmussen: " We must succeed in Afghanistan"

"We can't allow Afghanistan once again to become a safe haven for terrorists. Therefore, we must succeed," Anders Fogh Rasmussen told CNN's Christiane Amanpour in an interview.

The United States now has about 62,000 troops in Afghanistan, with NATO and other allies contributing about 35,000 more. The Pentagon currently plans to add 6,000 troops by year's end.

Top U.S. Gen. Stanley McChrystal recently warned U.S. President Barack Obama that more troops are needed within the next year or the nearly 8-year-old war "will likely result in failure," according to a copy of a 66-page document obtained by The Washington Post.

Asked about McChrystal's assessment, Rasmussen said he believed that the training of Afghan security forces should be strengthened.

"I think we have to beef up our training mission in Afghanistan to ensure that we develop the capacity of the Afghan security forces so that the Afghans can become masters in their own house," he said.

"It takes more trainers and more funds to develop the capacity of the Afghan security forces. And it's my strong conviction that this is the way forward, transition to Afghan lead, so we have to do more now so that we can be able to do less in the future," he said in the interview, on CNN's new show "Amanpour."

"There is a need to strengthen security and the number of troops," he told Amanpour.

Spain's government agreed recently to send 220 more troops to Afghanistan, though the decision needs to be approved by parliament.

"We can send more troops, but if there's not also a corresponding political, strategic action ... certainly it will cost us a lot more to finally have an Afghanistan that is a situation of stability."

The fighting in Afghanistan has ramped up sharply in the past year as U.S. troops and a NATO-dominated coalition battle a resurgence of the Taliban, the al Qaeda-allied Islamic militia that previously ruled most of the country.

Washington poured an additional 21,000 troops into Afghanistan to provide security for the recent election.

McChrystal also wrote in his report that NATO's troops have "operated in a manner that distances us physically and psychologically -- from the people we seek to protect. In addition, we run the risk of strategic defeat by pursuing tactical wins that cause civilian casualties or unnecessary collateral damage."

Zapatero said Spain has done a lot of such work. "Not only do we offer security by repelling attacks in Afghanistan, we're also doing a lot of work building bridges, building roads. We've built a hospital. We've sent drinkable water to 20,000 inhabitants," he said.

All About Afghanistan • NATO • Spain