KABUL, Afghanistan (CNN) -- August had the most fatalities this year for civilians in Afghanistan because of the country's disputed election, and violence could rise again when the final results are released, a U.N. report warns. 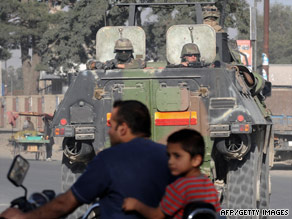 About 1,500 people died in Afghanistan from the beginning of the year to August, according to the U.N. report released this week.

The report did not say what the death toll was for August.

"August (was) the deadliest month since the beginning of 2009," the report said. "These figures reflect an increasing trend in insecurity over recent months and in elections-related violence."

The winner of Afghanistan's presidential election has been in dispute since the August 20 election. Results of the completed count, announced September 16, gave incumbent Hamid Karzai 54 percent of the vote, but the numbers won't be certified until authorities investigate allegations of irregularities.

More than 200,000 of the nearly 5.7 million votes cast have been thrown out because of these allegations.

The fifth death was an interpreter who was working with NATO's International Security Assistance Force in Afghanistan and died of wounds incurred in an insurgent attack, the military said in a statement.

No other details were immediately available.

So far this month, 34 U.S. troops have been killed in Afghanistan, according to CNN figures compiled from military reports.