(CNN) -- A magnitude 8.0 earthquake struck the Pacific near American Samoa, triggering towering tsunami waves that gushed over the island and leaving at least 22 people dead. 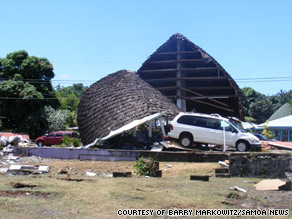 The tsunami wave hit right in the middle of the harbor of Pago Pago, the capital.

American Samoa Gov. Togiola Tulafono, speaking from Hawaii, said Tuesday's quake ranked "right up there with some of the worst" disasters on the island. He said about 50 people had been treated for injuries so far but he expected that number to rise.

"I thought it was the end of the world," said Dr. Salamo Laumoli, director of health services. "I have never felt an earthquake like that before."

Laumoli feared more fatalities would turn up as rescue workers were still trying to access parts of the island severed by damaged infrastructure.

Laumoli said people in outlying villages on one end of the main island have been cut off because the main bridge was washed away.

"Two or three villages have been badly damaged," he told CNN International.

Tulafono cited extensive damage to roads, buildings and homes, and said he had spoken to the military about mobilizing reserve forces for assistance.

The Pacific Tsunami Warning Center in Ewa Beach, Hawaii, canceled tsunami watches and warnings for American Samoa about four hours after the earthquake hit. However, a tsunami advisory is still in effect for for the coastal areas of California and Oregon.

The Japan Meteorological Agency also activated a tsunami advisory along its eastern coast. The precautionary alert means that the height of a possible tsunami wave would be less than a foot and a half.

The tsunami waves hit right in the middle of the Pago Pago harbor, the capital, said Cinta Brown, an American Samoa homeland security official working at the island's emergency operations center. The water devastated the village of Leone.

Watch a resident talk about what happened »

The same happened on the hard-hit east and west sides of American Samoa, she said.

Officials in the U.S. territory issued a clear call and were focusing on assessing the damage, Brown said.

Reports of damage were still emerging, but a bulletin from the Pacific Tsunami Warning Center said the waves "may have been destructive along coasts near the earthquake epicenter and could also be a threat to more distant coasts. Authorities should take appropriate action in response to this possibility."

Tulafono, the governor, was on his way back home Tuesday night on one of two U.S. Coast Guard C-130 transport planes flying to American Samoa with aid.

The FEMA team will include a variety of debris experts, housing experts, members of the Corps of Engineers, and other disaster relief specialists, Hamill said.

Tulafono told reporters Tuesday that it was hard being away from home when disaster came calling. It was a time, he said, for families to be together.

Those who experienced the massive quake described it as a terrifying event.

Brown was standing in a parking lot when her sports utility vehicle began rocking left and right.

"You could hear the rattling of the metal" of a large chain link fence around the lot, Brown said.

"It shakes you because you know something else is coming," she said.