Toll climbs to 608 in Indonesian quakes 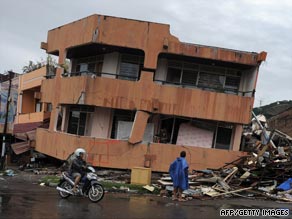 The death toll from the two earthquakes is expected to rise further.

Authorities called off the rescue operation in Padang, and are now looking for bodies in the rubble, said Ade Edward, head of the rescue team.

The death toll from the quakes that struck Indonesia last week climbed to 608 on Monday, the government said.

Officials feared the tally could go much higher.

The National Agency for Disaster Management said Monday that 343 people had been reported missing, 285 of them in the Pariaman region of West Sumatra. Edward earlier estimated the actual number of missing could be closer to 1,000.

A 7.6-magnitude quake struck Sumatra on Wednesday, followed by a 6.6-magnitude earthquake Thursday.

Wednesday's quake laid waste to buildings in the city of Padang, the capital of West Sumatra.

CNN's Kocha Olarn and Dan Rivers contributed to this report.

All About Indonesia • Earthquakes