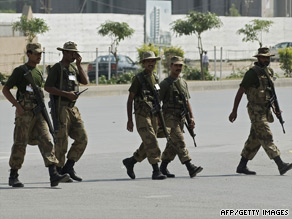 Soldiers march at army HQ in Rawalpindi Tuesday, three days after militants took dozens of hostages in a siege.

The official could not be identified because he is not authorized to speak to the media.

Pakistan's military blamed the Taliban in South Waziristan for Saturday's militant attack on the army's headquarters in Rawalpindi.

Five militants held dozens of hostages inside the army headquarters for some 22 hours. Eleven military personnel, three civilians, and nine militants were killed in the siege.

The Pakistani military has been targeting militant hideouts in South Waziristan over the past month, sealing access to the region in preparation for a major ground offensive, military spokesman Gen. Athar Abbas told CNN last week.

Both government and military officials say the offensive is coming soon but have yet to announce a date.

All About Pakistan • Swat Valley