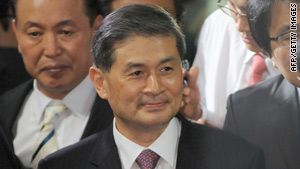 The scientist in 2006 admitted faking his findings, after questions of impropriety had emerged.

Reports of his studies had attracted worldwide attention and enthusiasm from researchers and patients excited about their potential for treating diseases such as cancer, diabetes and Alzheimer's disease.

In 2006, prosecutors said Hwang masterminded the process of creating false studies on stem-cell technology. They also backed up his assertion that assistant researcher Kim Sun-jong deceived him with fake data that became part of the research.

Prosecutors said Kim smuggled in-vitro fertilized stem cells into Hwang's lab to make it look as though the scientist was successful in creating stem cells through cloning.

Hwang apologized publicly in January 2006 after a panel of scientists from Seoul National University found he had not derived human stem cells from eggs, as he claimed.

"It is true that the research papers had fabricated data, and I will take full responsibility. I acknowledge this and apologize," he said at the time.

He acknowledged that much of the data and photographs published in the U.S.-based journal Science in 2004 and 2005 had been fabricated. The university panel's report said Hwang did produce the world's first cloned dog, Snuppy.