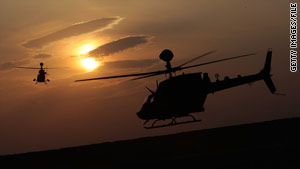 The OH-58 Kiowa is one type of helicopter used by U.S. forces in Afghanistan.
STORY HIGHLIGHTS
RELATED TOPICS

Kabul, Afghanistan (CNN) -- Low visibility was to blame for a helicopter crash that killed 10 Americans on Monday in western Afghanistan, the U.S. Army said Wednesday.

The helicopter crashed about 3:30 a.m. Monday when it lifted off after a successful operation to disrupt arms smuggling and narcotics trafficking in the Qadis district, the Army said.

"Thick dust stirred up from the initial takeoff and overwhelmed the visibility of the helicopter crew," an Army statement said. "While trying to correct the aircraft's movement, it struck a tall structure, causing it to crash. Militants did not fire at the helicopter at any point during the departure or crash."

Names of the dead service members will be released pending notification of next of kin, said the Army, which continued to investigate the crash.

It was one of two fatal incidents Monday involving helicopters. In all, 14 Americans died in the two crashes, the largest number of Americans killed in Afghanistan in a single day in more than four years, according to CNN records.

In the other crash, four U.S. service members died when two helicopters apparently collided in the air in southern Afghanistan. Two other NATO service members were injured.