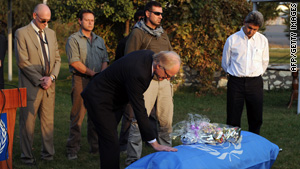 (CNN) -- The United Nations said Thursday it would pull about 600 staff members out of Afghanistan in the wake of a militant attack that killed five staff members and wounded nine.

"At the moment we're working with the entire U.N. family to identify what is critical staff and what is the support staff that can be moved," said Kai Eide, head of the U.N. Assistance Mission in Afghanistan.

The United Nations will also look into "what kind of activities can take place from elsewhere and what has to take place here," Eide said from the capital, Kabul, adding a limited number of staff will be moved within the country.

"Although details of the new measures can not be made public, it is expected that they will involve short-term relocations for some staff while additional security is being put in place," a U.N. statement said.

The United Nations had said it was reviewing its security procedures after the October 28 attack in the capital, Kabul, for which the Taliban claimed responsibility.

"The United Nations is fully committed to helping all of Afghanistan's people, as it has been for more than half a century," the statement said. "Every effort will be made to minimize disruption to our activities while these additional security steps are being taken."

NATO-led forces have been battling Taliban fighters across Afghanistan and during the summer, U.S. and British forces launched major offensives against the militants in southern Helmand province.

The U.N. announcement came a day after the British Ministry of Defense said five troops were killed in Afghanistan in a shooting blamed on a "rogue" Afghan policeman.

The attack happened Tuesday afternoon in the Nad-e'Ali District of Helmand, the ministry said. All the soldiers died from gunshot wounds sustained in the attack.