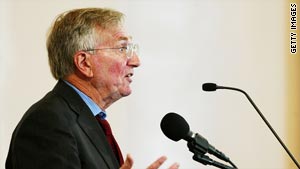 The report by journalist Seymour Hersh, pictured, has been dismissed by Pakistan as "nothing more than a concoction".
STORY HIGHLIGHTS

Islamabad, Pakistan (CNN) -- Pakistan angrily defended the security of its nuclear arsenal Sunday after a U.S. magazine reported that the Obama administration wants Pakistan to let Washington help secure its weapons in a crisis.

An article published in the new issue of The New Yorker states that Washington has serious fears about Pakistan's arsenal and has a covert team ready to fly to Pakistan at short notice. The article, written by veteran investigative journalist Seymour Hersh, reports that the Obama administration has been working on "highly sensitive understandings" with Pakistan's military that would let the U.S. military to provide "added security for the Pakistani arsenal in case of a crisis."

And it reported that a "highly classified" emergency response team was activated within the past few months in response to a report that a Pakistani nuclear component had "gone astray." The team was already in Dubai by the time the report turned out to be a false alarm, Hersh's article states, citing an unnamed Pentagon consultant.

Pakistan's foreign ministry blasted the article as "utterly misleading and totally baseless" on Sunday, calling it "nothing more than a concoction to tarnish the image of Pakistan and create misgivings among its people." It accused Hersh of making "several false and highly irresponsible claims by quoting anonymous and unverifiable sources."

"Pakistan's strategic assets are completely safe and secure," the ministry said in a written statement. "The multi-layered custodial controls, which have been developed indigenously, are as foolproof and effective as in any other nuclear weapons state.

"Pakistan, therefore, does not require any foreign assistance in this regard," the statement continued. "Nor will Pakistan, as a sovereign state, ever allow any country to have direct or indirect access to its nuclear and strategic facilities. Any suggestion to this effect is simply preposterous."

Estimates of Pakistan's nuclear arsenal currently range from 60 to 100 weapons. It first declared its status as a nuclear power in 1998, testing five bombs in a tit-for-tat with its south Asian archrival, India.

CNN has not independently confirmed the claims included in Hersh's 6,893-word piece, which appears in The New Yorker's November 16 issue and online. The article quotes a spokesman for U.S. Adm. Mike Mullen, the chairman of the Joint Chiefs of Staff, who said there are "no military units, special forces or otherwise, involved in such an assignment."

And Pakistan accused Hersh of displaying his "well-known anti-Pakistan bias" in the article, which it called "nothing more than a concoction to tarnish the image of Pakistan and create misgivings among its people."

In November 2001, another of his articles on Pakistan's nuclear program stirred a similar controversy. Hersh reported at that time that the United States was making plans to seize or disable Pakistani nuclear weapons to prevent them from falling into the hands of Islamic extremists. That report was met with widespread denials as well.

But Hersh said Sunday there is an "enormous difference" between what the Obama administration is trying to do and what was being considered before.

"They're now saying, 'We're going to help you,' " he told CNN. In addition, he said, the current U.S. plans focus not on removing warheads, but on separating them from the trigger mechanisms used to set them off.

And another goal of the agreements would be to reassure India, which has fought three wars with Pakistan since the two nations won independence from Britain in 1947. Hersh said U.S. officials hope securing Pakistani bombs will convince India to pull troops off the Pakistani frontier, allowing Pakistan to turn more of its military's attention toward battling al Qaeda and Taliban fighters along its northwestern border with Afghanistan -- where U.S. troops have been battling the Taliban since 2001.

"It's all part of the broad strategic scheme," Hersh said. But the plan has had unintended consequences in Pakistan, "one of which is they hate our guts," he said.

Pakistan remains mistrustful of the United States, fearing its nuclear secrets will fall into Indian hands, and "There's an enormous discrepancy between what they say and what they agree to do," Hersh said.

U.S. officials repeatedly have expressed confidence in the security of Pakistan's atomic weapons. But while the Pakistani military is now fighting a Taliban insurgency in its northwest, Hersh reported the greatest fear is the possibility of a mutiny by extremists within the Pakistani military.

"Our Army officers are not crazy, like the Taliban," Zardari said. "They're British-trained. Why would they slip up on nuclear security?"