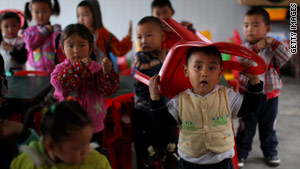 Children play in a temporary classroom in Sichuan Province, one year after the devastating earthquake.

Beijing, China (CNN) -- A Chinese blogger who helped victims of a devastating earthquake has been sentenced to three years in prison, his attorney said Monday.

The U.S. State Department had protested the blogger's jailing, saying his activities support China's efforts to institute the rule of law.

Huang was detained in June 2008 after working to help families of children killed in the May 12, 2008, Sichuan earthquake because of the collapse of poorly constructed school buildings, State Department spokesman Gordon Duguid has said.

Huang, founder of the human rights Web site 64Tianwang, had been posting articles on the site criticizing the way the earthquake relief was being organized, according to the organization Reporters Without Borders.

"In reality, it is very difficult for NGOs to deliver food aid. They are obliged to go through government channels. The government is using its propaganda to portray itself as a savior to little avail. Few citizens trust the government because of the corruptions scandals that already occurred during similar disasters in the past."

Huang was charged with illegal possession of state secrets after posting the appeals and complaints of the families. Officials said they found two municipal documents in his house.

He was tried secretly in August, Amnesty International said.

The human rights organization protested the sentencing, saying Huang should not have been arrested and should be released immediately.

"The Chinese government is penalizing someone who is trying to help the victims of the Sichuan earthquake. Huang Qi should be treated as a model citizen, committed to the rule of law, but instead he has fallen victim to China's vague state secrets legislation," said Sam Zarifi, director of Amnesty International's Asia Pacific program.

"We urge the judges to display humanity by freeing a seriously ill man who has already spent more than six and a half years of his life in prison," Reporters Without Borders said in a statement following Huang's sentencing last week.

"We also hope that the court will remember that all this courageous human rights activist did was provide information about the Sichuan earthquake victims, which cannot be considered a crime. If Huang were given another long prison sentence, we fear it could be fatal."

Huang previously spent five years in prison following a June 2000 arrest on the eve of the 11th anniversary of the bloody crackdown on demonstrators in Tinananmen Square, according to Reporters Without Borders.

He was charged with subversion for posting articles about the incident by exiled dissidents on his Web site.

Reporters Without Borders in 2004 awarded him its Cyber-Freedom Prize "for his online defense of free expression and human rights," the group said.

The organization said last week Huang had been held in "very harsh conditions since his arrest, although he has been suffering from very bad headaches."

Huang plans to appeal the sentencing by the Chengdu Wuhou District Court, Mo said. If unsuccessful, he is scheduled to be released in June 2011, three years after authorities arrested him.

CNN's Wen-Chun Fan in Beijing, China contributed to this report.