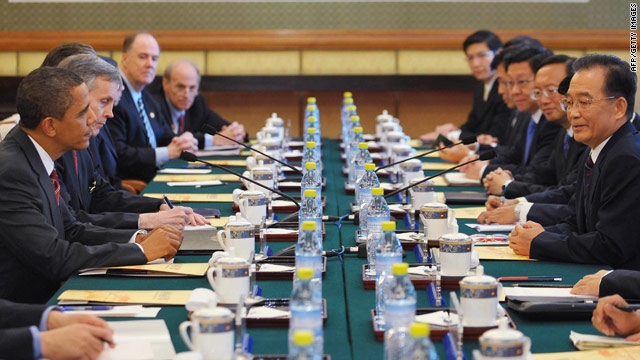 Also on Thursday, China's State Council announced plans "to reduce the intensity of carbon dioxide emissions per unit" of gross domestic product in 2020 by 40 percent to 45 percent, compared with its 2005 level, state-run media reported.

The reductions will be "based on our own national conditions" and "is a major contribution to the global effort in tackling climate change," the State Council said, according to the Xinhua news agency.

The news followed U.S. President Barack Obama's announcement Wednesday that he would attend the summit, which is to run from December 7 to 18 in Copenhagen.

The executive secretary of the climate change conference welcomed the announcements from China and the United States but called for rich countries to come up with money to help poor countries meet their goals.

"We still await clarity from industrialized nations on the provision of large-scale finance to developing countries for immediate and long-term climate action," he added.

Obama is prepared to offer a goal of the United States reducing emissions to 17 percent below 2005 levels by 2020, the White House said in a news release.

Asked about the U.S. offer of a 17 percent reduction, China spokesman Qin said: "The U.S. is the biggest developed country in the world, so it should shoulder its historical responsibilities and obligations, commensurate to its national development level. We also believe the relevant countries and international community should make efforts toward the success of the Copenhagen conference."

The announcements by China and the United States follow the world's top economic powers acknowledging earlier this month that there was no hope of a major breakthrough over climate change by year's end. They acknowledged that at the Asia-Pacific Economic Cooperation Forum in Singapore, dimming hopes for the Copenhagen summit.

But Obama's decision to attend "flies in the face of predictions of failure in Copenhagen well before the conference even begins," said Oxfam America President Raymond C. Offenheiser.

The White House announcement coincided with a briefing from the U.N. Framework Convention on Climate Change on what must be agreed upon in Copenhagen.

De Boer, the executive secretary, welcomed Obama's decision to attend the talks, saying his presence is "critical to a good outcome."

He said the United States is the only industrialized country that hasn't yet given the group a proposal for cutting carbon emissions. It is "politically critical" that the United States indicate what it can do "in numerical terms" to reduce its climate impact, he added.

Next month's climate talks aim to strike a deal on a successor agreement to the Kyoto Protocol, the 1997 pact that has legally binding targets for reducing greenhouse gas emissions. The United States never ratified it, though more than 200 nations did.