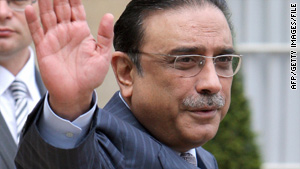 The National Reconciliation Ordinance, an amnesty passed in October 2007 under then-President Pervez Musharraf, protected more than 8,000 bureaucrats and politicians, including Zardari and his wife, late former Prime Minister Benazir Bhutto.

The supreme court could reopen corruption cases against Zardari if it declares the ordinance under Musharraf's military rule was unconstitutional and never approved by parliament.

In a television interview with Pakistan's Express News on Friday, Zardari said he still had immunity as president and wasn't concerned about the reopening of cases against him.

"The president is absolutely not concerned," presidential spokesman Farhatullah Baber told CNN. "The matter is now before the courts, and it's whatever the courts decide. We will cross that bridge when it comes."

Last month, the president's party tried to extend the National Reconciliation Ordinance in parliament but withdrew it after strong protest from opposition parties.

The decision followed the supreme court's ruling to reverse a series a decrees that came with Musharraf's imposition of military rule in October of 2007.

In his interview with Express TV, Zardari also suggested he'd like to give up his power to dissolve parliament and dismiss the prime minister by December, but his spokesman tempered expectations.

"Actually the president did not set a deadline," Baber told CNN. "The president said it has to be done by parliament and he would like to see it done before the end of the year."

The president's powers to dismiss the prime minister and dissolve the parliament came with an amendment in 2003 under the military rule of Musharraf.

Zardari has repeatedly vowed to repeal the amendment but more than 15 months into his presidency he has yet to do so.

Islamabad-based political analyst Ahmed Mehboob, head of the Pakistan Institute of Legislative Development, said Zardari's recent decisions and statements are designed to take off increasing pressure from the public and political opponents.

"To stay on as president he will have to make some adjustments," Mehboob told CNN. "Shedding some of these powers is a minimum requirement."