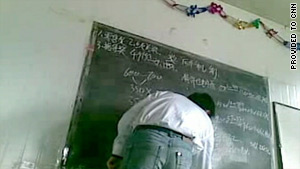 A leader of a pyramid scheme provides instruction in a video obtained by CNN.

Beijing, China (CNN) -- "We can be friends, and we can offer you a good life," the woman said to the class filled with new investors.

If any were skeptical, they didn't show it. Next came the young man, neatly dressed wearing a tie. He stood at a chalkboard writing mathematical equations that he said explained how this formula for investing would make them all rich.

Then came the big promise -- if everyone followed the formula, they could make $36,000 a month. Some cheered, others gasped, according to a video obtained by CNN,

This is all standard for pyramid selling -- but in China, it takes on another twist.

Often new members in the pyramid scheme are kept locked in semi-military style dormitories, isolated from the outside world and then inundated with promises of incredible returns on their investments.

Li should know. For about two years he was part of one such scheme.

"Lies become truth after being told for 1,000 times. They apply a semi-military closed management, which is very important. A new member, for example me, will be brainwashed and forbidden from contacting the outside world."

Pyramid selling was outlawed in China more than a decade ago, and in February of this year the government added a provision against the practice in the crime law, helping strengthen the authorities' fight against pyramid schemes.

But the schemes continue to flourish, especially now during tough economic times. The pattern doesn't change: The schemes rely on new members making an initial investment to join and then they make money by persuading others to participate, too.

"I myself am a victim of a pyramid selling scheme," Li said. "I was cheated by a relative, who told a white lie and claimed to introduce me to a job [and] took me there by cheating. I also experienced the brainwashing period. At first I didn't believe in it, but I was convinced after the seven-day training. So I believed and joined in."

Police launch crackdowns from time to time. Earlier this year, in the northern city of Baoding, officers used a sledgehammer and crow bar to force their way into one home where new recruits were being held.

Inside, they say they found evidence of how the members were living in an "economic cult." Beds were neatly made in military style, shoes meticulously arranged and toothbrushes lined up.

Police took the members outside, where one officer tried to reason with them.

"The company are liars. Think about it. This is so easy, such an easy way to make money. Is it possible?" the officer asked the group, according to a video of the raid obtained by CNN.

Others were forced to form a line and carry a banner through the city that read: "Stopping pyramid schemes is everyone's responsibility."

Earlier this year, 21-year-old Wei Qiufeng was rescued from a pyramid cult by her boyfriend.

"I put in 2,900 RMB (US$424) and they said I could get millions of RMB back. Basically I was attracted by the promise of making millions," she said.

Wei said she lost a total of $1,464 given to her by her parents. She said her instructors taught her how to lie to get the money.

"We used some tricks to kind of cheat money from the family . . . because I work as a beautician in the past they told me to say it's for a course, with that I can be better paid."

While there are no official numbers, Li said more than 10 million people are involved in pyramid selling all across mainland China, making the growing gap between rich and poor even worse in a country where the average urban worker's wage is just over US $2,000.

"It's very hard for people to find a job and live a good life," said Li, who left his pyramid scheme when he figured out what was actually going on. "So they have a psychological need to become rich overnight, and that's why they're easily cheated."