Thousands march against corruption in Indonesia 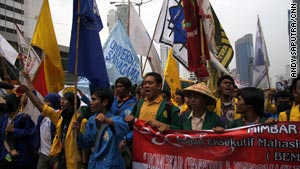 Students and women protesting against corruption in Jakarta.

Jakarta, Indonesia (CNN) -- Thousands of protesters gathered in several cities in Indonesia on Wednesday to push the government to deal with rampant allegations of corruption.

Organizers planned the protests for International Anti-Corruption Day, which the United Nations had declared to raise awareness about efforts to combat graft.

The protests come amid a growing public dissatisfaction over investigations into a bailout of Indonesia's Century Bank.

The controversy began when critics accused President Susilo Bambang Yudhoyono and some of his political allies of benefiting from the bailout money. The $710 million government bailout occurred in November 2008.

In the South Sulawesi capital of Makassar, where protests are typically more violent, hundreds of demonstrators called for the resignation of Indonesian Vice President and former Central Bank Governor Boediono and Coordinating Minister for Economic Affairs Sri Mulyani.

Both were blamed for key roles in the bailout.

In Jakarta, protesters chanted: "Down with corruptors" and other slogans. One group burned a picture of Boediono.

"We know that corruption is the source of stupidity, poverty and social imbalance," protester Fadjroel Rachman said. "We are expecting the world to bring down all the corruptors as well as Indonesia. Whoever the corruptor is, we have to take them down. If you're not a corruptor, there is no reason for you to be afraid."

Earlier this week, Yudhoyono said the planned protests were aimed at discrediting his government. On Tuesday, he seemed to soften his stance.

In a televised speech, he said, "I will lead the jihad against corruption," and called on everyone to join the rallies in an orderly and peaceful manner.

Reacting to Yudhoyono's speech, student Zulkairnan who attended the protests told CNN, "We are here to push the government to solve the Century Bank case. After watching his speech last night, I became an optimist. I believe he can eradicate corruption. He just needs a more powerful team."

Atin, another student protester said: "I'm sure [the president] can handle corruption. Many corruptors have been arrested in his era. He did that then, he can also do it now. He needs to take a more firm step."