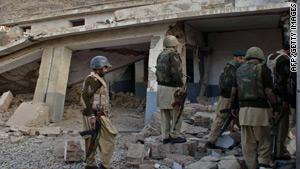 One of the explosions at a school on the outskirts of Peshawar destroyed a wall, said Sahibzada Anis, Peshawar's administrative chief. No injuries were reported.

Two other bombs were set up outside a school in the Khyber Agency of Pakistan's semiautonomous tribal areas, according to Azam Jan, a senior local administration official.

One blew up and damaged a wall while the other was defused by local officials.

A third school was hit in the same area, and the attack destroyed the wall of the compound but not the buildings, Jan said.

Peshawar, the capital of the Northwest Frontier Province, is at the core of Pakistan's war on terror. The military has launched multiple offensives targeting homegrown militants, sparking a retaliation.

Since October, the city has been the target of a series of attacks launched by militants to revenge a major Army offensive to root out the Taliban.

A truck bomb in a popular market killed over 100 people in October and government and security forces have suffered regular attacks.