MOSCOW, Russia (CNN) -- Russian investigators have no suspects in Monday's killings of a prominent human rights lawyer and a journalist despite round-the-clock efforts to find the gunman, officials said Wednesday. 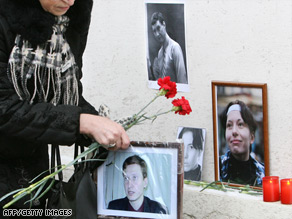 A woman places flowers at the spot where Stanislav Markelov and Anastasiya Baburova were gunned down.

"I can only state that it is a young man 180 centimeters (5 feet, 11 inches) high with a slim body build," Pronin said. "I can also state that there are no witnesses who saw the killer."

He added police could not determine the killer's ethnicity because a cap was over his eyes.

The gunman killed attorney Stanislav Markelov, 34, in front of an office in central Moscow, Russian media reported. Journalist Anastasia Baburova, 25, who worked for the pro-democracy newspaper Novaya Gazeta, was also shot when she tried to intervene, and she died later in a hospital, Russian reports said.

The killer stood behind them and aimed at the back of the head, Novaya Gazeta reported Wednesday.

An estimated 3,000 people rallied in the Chechen capital of Grozny on Tuesday to protest the killings, Interfax reported.

"I am deeply sorry and disgusted for Russia: how can you just shoot people down in broad daylight in the center of Moscow," said artist Alexandra Fomina, according to Reuters. "Can we tolerate this much longer? And will they catch anyone for this murder -- or will it be business as usual?"

The funerals are scheduled for Friday.

Markelov was known for his work on high-profile cases. He represented the family of a Chechen woman killed by a former Russian colonel in March 2000, Russia's Interfax news agency reported.

Markelov had held a news conference hours before his death opposing the early release of the colonel, Yury Budanov, who was freed after serving eight years of a 10-year sentence.

Novaya Gazeta Editor-in-Chief Dmitry Muratov suggested Baburova was killed when she tried to apprehend the lawyer's killer, but he also could not rule out the possibility that she herself was a target, Interfax reported.

"In fact, these two theories might well have something in common," Muratov told the news agency.

Budanov has denied any involvement in the killings.

"Do you think I want to get another prison term after spending several days in freedom?" Budanov said in an interview with the Russian newspaper Komsomolskaya Pravda.

He told the interviewer the crime was "masterminded by those who want to drive a wedge between Russians and Chechens."

All About Russia • Chechnya