(CNN) -- NATO representatives and lawmakers from alliance nations will meet in Iceland Thursday to discuss security challenges that are likely to arise as the Arctic Circle thaws. 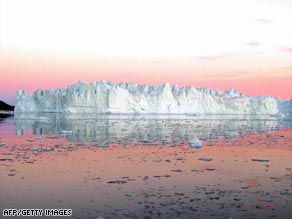 Global warming is opening up more parts of the Arctic to development and raising security concerns.

The area -- one of the planet's most fragile and pristine ecosystems -- sits atop a bounty of untapped fossil fuels. And as the melting polar ice makes the Arctic more accessible to ships, several countries are scrambling to claim jurisdiction in the area.

"The economic interests are reflected in ... competing claims by relevant stakeholders, and resumed military presence in the area," NATO said on its Web site. "As it is a region of enduring strategic importance for NATO and allied security, developments in the High North require careful and ongoing examination."

At the same time, Arctic water is warming so quickly that the entire region could be ice-free by 2013.

Unlike Antarctica, which has a treaty that prohibits territorial claims, there is no agreement for the vast expanse of the Arctic. So questions about drilling rights and shipping lanes are somewhat murky.

According to the U.N. Convention on the Law of the Sea, countries are entitled to exclusive economic zones up to 200 miles from their shores. But some countries are trying to extend that zone.

Russian scientists want to prove the seabed below the North Pole is part of the Eurasian continental shelf, an area called the Lomonosov Ridge.

If that is the case, the region would be under Russian control. Moscow argued before a U.N. commission in 2001 that the ridge is an extension of its continental territory. But the United Nations asked for more evidence.

Danish scientists are trying to prove that the Lomonosov Ridge is connected to Greenland, and Canadian scientists are looking for links between the ridge and Ellesmere Island, a Canadian territory.