Editor's note: Nic Robertson is CNN's Senior International Correspondent and reporter for "One Woman's War," a documentary airing on CNN International this week. Paul Cruickshank, the co-producer of the program, is a fellow at the NYU Center on Law and Security and the author of "Love in the Time of Terror," the lead feature in the March 2009 issue of the American version of Marie Claire magazine, which profiles el Aroud. -- An alleged terror cell rounded up hours before European Union leaders were due to attend an summit in Brussels last December had ties to the very top leadership of al Qaeda, counterterrorism officials told CNN.

BRUSSELS, Belgium (CNN) -- Last December 11, fourteen individuals were arrested in the early hours of the morning in one of the largest counterterrorism operations in Belgian history. Six were eventually charged with participation in a terrorist group. The others were released. 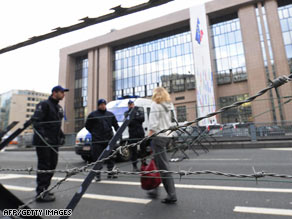 Guards at a Brussels roadblock last December, at the start of a European Council summit.

The officials told CNN that the alleged cell had connections to a senior al Qaeda operative who helped orchestrate the 2006 "Airline Plot," widely recognized as al Qaeda's most serious terror attempt since the September 11, 2001, attacks on the United States.

The source could not reveal the operative's name to CNN because of the ongoing investigation. The 2006 plot involved plans to simultaneously blow up U.S.-bound passenger jets with liquid explosives hid in carry-on luggage.

A senior counterterrorism source with detailed knowledge of the investigation told CNN the alleged cell was connected to the top ranks of al Qaeda through Moez Garsallaoui, a Tunisian Islamist militant who left Belgium for the tribal areas of Pakistan in late 2007.

Garsallaoui, 41, is the husband of Malika el Aroud, 49, a Belgian-Moroccan who was one of those charged in December. When she was arrested, Belgian authorities publicly described her as an "al Qaeda Living Legend."

Belgian investigators told CNN that a pro-al Qaeda Web site administered by el Aroud helped radicalize the members of the alleged Brussels terrorist cell. El Aroud is the subject of a half-hour documentary, "One Woman's War" which airs this week on CNN International.

Garsallaoui and el Aroud were interviewed by CNN in February 2006 in Switzerland, where they were then living. During the interview, el Aroud said, "Most Muslims love Osama (bin Laden). It was he who helped the oppressed. It was he who stood up against the biggest enemy in the world, the United States. We love him for that." She showed CNN how she administered her Web site, which included postings of attacks on U.S. troops in Iraq and a section dedicated to the unabridged speeches of top al Qaeda leaders.

Belgian counterterrorism sources told CNN that el Aroud's status as the widow of an al Qaeda hero and her defiant promotion of bin Laden's jihad has made her a "magnet" to radical jihadists across Europe.

El Aroud's lawyer, Alexandra Tempels-Ruiz, told CNN that her client denies being a member of a terrorist group and that she is not liable for the actions of those who read her postings.

"People sent Malika private e-mail messages through [her Web site] asking her how to go to fight in Afghanistan," Tempels-Ruiz said. "But Malika never gave these people instructions."

After his release, Garsallaoui moved to Belgium to join his wife there. In Brussels they carried on their online work, building up their Web site to what it says has more than 1,400 subscribed members.

Alain Winants, the Head of Belgian State Security, the country's domestic intelligence arm, told CNN el Aroud "was one of the leading jihadist persons on the Internet."

"Her site attracts very much interest," Winants said, "and that's of course why she is a target for intelligence services."

Belgian security services, which had monitored the couple since their marriage in 2004, stepped up surveillance when they moved back to Belgium, according to Belgian counterterrorism sources. Those sources say that it was during this period that the couple moved from radicalizing to recruiting.

Belgian police told CNN that el Aroud and Garsallaoui acted in tandem to encourage individuals, including several of those arrested in Brussels in December, to leave Belgium to fight in Afghanistan. El Aroud, it is alleged, inspired young men to volunteer for Jihad through her incendiary Web postings. Garsallaoui, the police say, went out to the streets to physically recruit people.

"I intensely hope and pray everyday that our fighters massacre those American pigs and their allies," el Aroud stated in one posting on her Web site in December 2007.

"Wherever [Malika] goes she touches people," Glenn Audenaert, director of the Belgian federal police, told CNN, "and wherever people are touched by this message that this starts a process of radicalization, and hence of thinking of a terrorist act or preparing a terrorist act."

Hicham Beyayo, one of those arrested last December, says that it was Garsallaoui who recruited him to fight Jihad in Afghanistan. Christophe Marchand, Beyayo's lawyer told CNN that his client was approached by Garsallaoui in a mosque in his neighborhood and that el Aroud's husband persuaded him to volunteer for jihad in Afghanistan.

"Garsallaoui had an answer for every question," Marchand said his client told him. Before leaving Belgium, Beyayo had become an site administrator on el Aroud's pro-al Qaeda Web site, according to Marchand.

According to Belgian counterterrorism officials, Beyayo traveled to the tribal areas of Pakistan with a small band of wannabe European jihadists in early 2008, traveling through Turkey and Iran to reach Pakistan. Beyayo, through Marchand, claims that he was given travel advice by Garsallaoui, who had left Brussels for the tribal areas of Pakistan several weeks before.

Belgian counterterrorism sources told CNN they believe Beyayo and others received some form of group training in the tribal areas of Pakistan.

Beyayo's lawyer says his client denies receiving any terrorist training or had any connections to al Qaeda and that he did not have enough money to purchase guns.

"It was not that organized," said Marchand. "It was sort of a jihad vacation, I would say."

Beyayo told his lawyer he never crossed into Afghanistan, but instead remained within the tribal areas of Pakistan. During his time there, Beyayo claims he had to move around a lot, said Marchand, to avoid being targeted by U.S. Predator drones. Those strikes, Beyayo told his lawyer, had a reputation in jihadist circles of being "very efficient."

Garsallaoui, meanwhile had managed to cross the border into Afghanistan, according to intelligence source and Beyayo's lawyer.

In the first half of 2008 Garsallaoui sent el Aroud a picture of himself holding a rocket launcher. Counterterrorism sources say that the message was intercepted by U.S. counterterrorism agencies. According to a lawyer briefed on the legal dossier in the Belgian case, el Aroud's reply was, "You're so beautiful." In June, Garsallaoui sent el Aroud an e-mail claiming to have killed five Americans. His wife congratulated him, according to the legal source.

In one intercepted e-mail to el Aroud in 2008, Garsallaoui claimed to have narrowly missed being hit by a missile strike in the mountains between Afghanistan and Pakistan. It is unclear if the attack came from a Predator drone.

A senior counterterrorism source with detailed knowledge of the investigation told CNN that sometime during this period Garsallaoui developed close connections with a senior al Qaeda operative who orchestrated the 2006 airline plot. The source could not reveal the al Qaeda operative's name to CNN because of the ongoing investigation.

On September 26, 2008, Garsallaoui raised the stakes by urging attacks in Europe in an online statement. "The solution my brothers and sisters is not fatwas but boooooooms," the posting stated. The posting was discovered by CNN on his wife el Aroud's Web site.

In the second half of 2008, members of Beyayo's travel group started to return to Europe. Beyayo was the last to return, arriving in Belgium in early December, according to police accounts.

Their return deeply concerned Belgian security services, who were all too aware that several recent terrorist plots in Europe, such as the 2005 London bombings, involved European operatives who had trained in the border region between Afghanistan and Pakistan.

"When these people come back from those war scenes they present a potential danger," Audenaert, director of the Belgian federal police, told CNN.

According to counterterrorism sources, the trigger for the Brussels arrests was an alarming email sent by Beyayo in early December shortly after returning to Belgium from the tribal areas of Pakistan, widely considered to be al Qaeda's current base of operations. The e-mail, which CNN has learned was intercepted by U.S. counterterrorism agencies, suggested that Beyayo had been given the green light to launch an attack in Belgium.

Not wanting to take any risks, Belgian authorities ordered police to round up suspected cell members, several of which, counterterrorism sources told CNN, had been under surveillance for more than a year. Belgian counterterrorism investigators told CNN that around a hundred police officers were involved in the investigation.

When police raided several properties in and around Brussels, they found little evidence that an imminent plot was in the works, Belgian counterterrorism investigators told CNN. No explosives or fire arms or attack blueprints were recovered.

Beyayo's lawyer, Marchand, told CNN that the e-mail that triggered the arrests was just tough talk designed to impress an ex-girlfriend who left him after he cheated on her.

"He wanted to re-seduce her," Marchand said. "He wanted to impress her by sending an e-mail saying the organization could do an operation in Belgium."

Despite the lack of clear evidence that an attack was imminent, Belgian police are adamant that the alleged cell had ties to al Qaeda and represented a potential national security threat.

"We knew we were in the presence of an organization that was part of al Qaeda," said Audenaert, the Belgian federal police director. "We knew these people were in contact with the highest levels of al Qaeda in Afghanistan, so we considered it sufficiently serious to apprehend these people."

El Aroud, Beyayo and four other alleged members of the terrorist cell are expected to be face trial in the next year. Garsallaoui is still at large, believed by intelligence agencies to be in the tribal areas between Afghanistan and Pakistan. His continued presence there is deeply concerning to Belgian security services.

Alain Grignard, who heads counterterrorist operations for the Belgian Federal Police, told CNN that the mountains of Afghanistan and Pakistan have replaced Iraq as the destination of choice for wannabe jihadists from Belgium and other countries on the European continent.

"Not since the year before 9/11 have we seen as many people travel towards the Afghanistan-Pakistan conflict region," Grignard said.