(CNN) -- A "faulty" flight instrument contributed to the crash of a Turkish plane last month in the Netherlands, an accident that killed nine people and injured more than 60 others, Dutch safety authorities said on Wednesday. 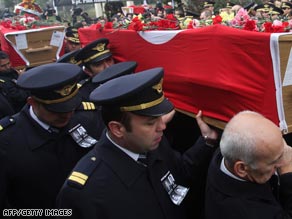 Turkish Airlines workers carry the coffins of four staff who died in the crash.

On February 25, Turkish Airlines Flight 1951 from Istanbul to Amsterdam dropped from the sky on approach to the landing strip at Schiphol Airport, shattering into three pieces in a muddy field.

Pieter van Vollenhoven, head of the Dutch Safety Board, said the instrument was one of the plane's two altimeters, which measure altitude.

Because of the "faulty" left altimeter, the plane on automatic pilot reacted as if it were lower than it was and started to behave as if it was touching down.

The plane was at 700 meters but the instrument indicated that it was at ground level. This caused the automatic throttles to slow the plane down, leading to a loss of speed.

The plane was on automatic pilot when it crashed. Van Vollenhoven said there had been misty weather and if it were clearer then the pilots might have noticed how far up they were.

He said that if such instruments don't function, automatic pilots should not be used for landings. Investigators said there had been faulty meter readings on two other flights but the pilots were able to land.

Van Vollenhoven said that the pilots realized the problem but failed to appreciate what had been happening until it was too late.

In the immediate aftermath of the crash investigators said the plane fell almost vertically to the ground indicating the aircraft did not have enough forward speed.

The plane crash less than 500 yards short of the runway.

Passengers described feeling the plane suddenly drop before impact, and at least one passenger said he heard the pilot trying to give more power to the engines before it went down.

Four of the crew and three Boeing employees were among the nine people killed in the crash.

Turkey's flagship airline is well-rated internationally for its overall safety record and the Boeing 737-800 has a good safety record.

The last previous fatal incident at the Amsterdam airport happened in April 1994 when a KLM aircraft crashed as it tried to return to Schiphol shortly after takeoff.