PARIS, France (CNN) -- President Nicolas Sarkozy of France will put his government on the line over his decision to bring the country back into NATO's integrated military command, more than 40 years after it walked out. 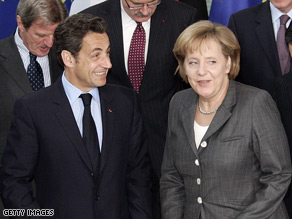 French lawmakers will vote Tuesday on whether to support Sarkozy's move, which he announced officially on Wednesday.

If they do not back him, they could theoretically force government ministers to resign en masse.

But Sarkozy's party holds a majority in parliament, and although some lawmakers in his own party are unhappy with the move, it is thought unlikely that they will vote against the president.

"His move represents both the culmination of a steady rapprochement with NATO on France's part over the last 15 years and a new boost to relations between France and the Alliance.

"France has always been an important ally within NATO; its current contribution to operations and missions is crucial. Its full participation in all the civil and military decision-making and planning processes cannot but strengthen the Alliance further," the NATO leader said.

De Gaulle said the United States had too much influence in NATO, which was founded in the early days of the Cold War to defend Europe from the Soviet Union.

His decision meant no French forces could be under permanent allied command and that France would have no participation in defense planning.

In 1995, France rejoined NATO's military committee, which advises NATO's political authorities on military policy and strategy and provides guidance on military matters to NATO's strategic commanders. It contributes troops and funding to NATO activities, including KFOR in Kosovo and ISAF in Afghanistan.

NATO is holding celebrations in France and Germany next month to mark its 60th anniversary, which U.S. President Barack Obama and other NATO country leaders are expected to attend.

-- CNN's Sujatha Samy in Paris contributed to this report.

All About NATO • France • Nicolas Sarkozy