Prince William: 'Mummy' is a hollow word for me

(CNN) -- Prince William has spoken in depth publicly for the first time about death of his mother, Diana, Princess of Wales, 12 years ago, saying "mummy" is now a hollow word "evoking only memories." 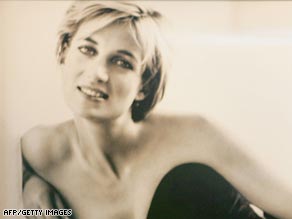 Diana, Princess of Wales, died in a Paris car crash 12 years ago.

Prince William was only 15 and his brother Prince Harry 12 when Diana died in a Paris car crash along with Dodi Fayed in 1997.

The Prince made the comment Thursday during a speech to mark his new role as patron of Britain's Child Bereavement Charity -- a group his mother was once involved with.

The British Press Association reported that he told the launch of the charity's Mother's Day campaign: "My mother Diana was present at your launch 15 years ago, and I am incredibly proud to be able to continue her support for your fantastic charity, by becoming your royal patron.

"What my mother recognized then -- and what I understand now -- is that losing a close family member is one of the hardest experiences that anyone can ever endure.

"Never being able to say the word 'Mummy' again in your life sounds like a small thing. Tell us what you think about Prince William's moving comments

"However, for many, including me, it's now really just a word -- hollow and evoking only memories.

"I can therefore wholeheartedly relate to the Mother's Day campaign as I too have felt -- and still feel -- the emptiness on such a day as Mother's Day."

The charity wants to raise awareness of the problems suffered by mothers bereaved of a child or children bereaved of their mother.

Based in Buckinghamshire, a region west of London, it educates professionals and supports families after a death.

Writing in Britain's Daily Mail newspaper about his new role, the Prince said the reality of losing a child or parent was "awful."

"Initially, there is a sense of profound shock and disbelief that this could ever happen to you. Real grief often does not hit home until much later.

"For many it is a grief never entirely lost. Life is altered as you know it, and not a day goes past without you thinking about the one you have lost."

Mother's Day in the UK always falls on the fourth weekend of Lent, and this year is on March 22.

The magazine claimed an official announcement was "imminent."