LONDON, England (CNN) -- Britain is prepared to send more troops to Afghanistan, the head of the British Army said in an interview published Friday. 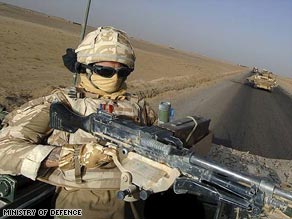 Britain currently has 8,300 troops in Afghanistan.

Richard Dannatt, the chief of the general staff, did not say how many troops he would be prepared to deploy. Britain currently has 8,300 troops in Afghanistan.

Dannatt told The Times newspaper that elements of the 12th Mechanized Brigade had been "earmarked for Afghanistan." He said there are no plans to send the whole brigade of 4,000 troops.

"If we're asked for more and we say we can, it's not going to be 4,000 -- it's going to be something in between" that and the current troop level, Dannatt told the Times. The Ministry of Defense confirmed his remark.

British defense sources told The Times that a rise of 1,700 to 2,000 was "the uppermost ceiling."

U.S. President Barack Obama is expected to announce a new strategy for Afghanistan on Friday that includes sending another 4,000 troops to the country with hundreds of civilian specialists, senior administration officials told CNN.

The troops -- which are in addition to the 17,000 that the president announced earlier would be sent to Afghanistan -- will be charged with training and building the Afghan Army and police force. The plans include doubling the Army's ranks to 135,000 and the police force to 80,000 by 2011, the officials said.