PARIS, France (CNN) -- Hundreds of French workers, angry about proposed layoffs at a Caterpillar factory, were holding executives of the company hostage Tuesday, a spokesman for the workers said. 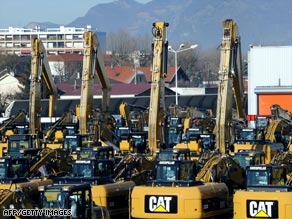 Caterpillar's French staff say they are angry about a lack of negotiations over layoffs.

It is at least the third time this month that French workers threatened with cutbacks have blockaded managers in their offices to demand negotiations. Executives were released unharmed in both previous situations.

The latest incident started Tuesday morning at the office of the construction equipment company in the southeastern city of Grenoble.

The workers were angry that Caterpillar had proposed cutting more than 700 jobs and would not negotiate, said Nicolas Benoit, a spokesman for the workers' union.

They did not want to harm the Caterpillar executives, Benoit told CNN.

One hostage was released Tuesday evening leaving workers with four captives inside the Caterpillar building.

The released man was a human resources director identified only as Mr. Petit, because he has heart problems, union representative Bernard Patrick told CNN. Petit had a heart attack a few weeks ago, Patrick said.

The four others still being held are Nicolas Polutnik, the head of operations; two other executives; and Petit's personal assistant, he said.

About 500 employees were also outside the building protesting.

"The actions that are taking place today, led by a small minority of individuals, are not helping as we work for a positive resolution of this situation," said Chris Schena, Caterpillar vice president with responsibility for manufacturing operations in Europe, Africa and the Middle East, in a statement.

"The best way to resolve this matter is to continue the negotiations through the Works Council to find a solution that's fair to our employees and allows Caterpillar to remain a leader in a rapidly changing global marketplace," Schena said, adding that the company was "concerned for the safety of our employees."

Benoit said all the workers wanted to do was negotiate with Caterpillar and they were upset that the company did not show up to two earlier scheduled negotiating sessions.

The employees being held in their office were being allowed to get food, Benoit added.

Police arrived at the scene two hours after the incident began but it had not been settled.

Employees at a French 3M factory held a manager hostage for more than 24 hours Wednesday and Thursday of last week over a dispute about terms for laid-off staff.

Earlier this month, the boss of Sony France was held overnight before workers freed him after he agreed to reopen talks on compensation when the factory closed.

France has been hit by nationwide strikes twice in the past two months.