L'AQUILA, Italy (CNN) -- A strong aftershock rattled central Italy early Thursday as thousands of Italians in the region were still coping in the aftermath of Monday's deadly quake in nearby L'Aquila. 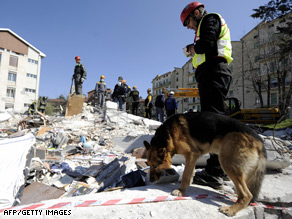 A rescuer and his dog look for survivors in L'Aquila.

There were no immediate reports of damage or injuries from the latest aftershock.

Aftershocks have heightened anxiety in the area -- including a moderate 5.6 magnitude temblor that struck the area Tuesday, the U.S. Geological Survey said.

Government teams have surveyed 20,000 homes -- house by house -- within 600 square kilometers (232 square miles), and were issuing certificates of habitability for any structure that escaped major damage, Berlusconi told CNN.

About 28,000 Italians were left homeless when the quake struck before dawn on Monday. Most of those people are living in tents; the rest are staying in hotels.

"This is an aerial view of Onno, and you can see, unfortunately, how the town has been totally destroyed," the prime minister told CNN. "Here, we can go into greater detail and concentrate on individual houses. This helps us to assess the damage right away and tells us how much it will cost to rebuild.

"We have the plans for reconstruction and intend to start immediately with the building projects."

Recovering from losses and reconstructing the city of L'Aquila, the epicenter of the 6.3-magnitude quake, will take several years, said Agostino Miozzo of the Italian Civil Protection Agency. L'Aquila is an historic city about 120 km (75 miles) northeast of Rome.

Watch the latest from the recovery operation »

Miozzo said pre-fabricated villages would be set up until permanent homes could be built.

According to Berlusconi, "We will build a new town near the capital, L'Aquila, and keep the possibility open for many families to stay, for the time being, in hotels along the coast, less than a hour away, in pleasant and comfortable circumstances."

Berlusconi said the plan for the new town would involve low-rate mortgages.

"This is not an alternative to the reconstruction," he said Wednesday. "These are additional houses."

L'Aquila's bishop plans to hold a mass funeral for the victims Friday, he said.

Pope Benedict XVII said Wednesday he would like to visit L'Aquila, but the ANSA news agency said the visit would not happen this week or the next.

The pope told the people of L'Aquila and surrounding areas that he shares their pain and their worries.

"I want you to know that the pope is praying for everybody," he told the General Audience at the Vatican on Wednesday, "is imploring the mercy of the Father for the dead, and the maternal comfort of the Virgin Mary and the support of Christian hope for the relatives and survivors."

According to CNN witness accounts and Italian emergency medical staff, rescuers pulled a woman out of the rubble alive some 42 hours after the quake hit Monday.

The woman was being transferred to a hospital in Rome, according to Dr. Emanuela Troiani Sevi, who worked in a field hospital set up in L'Aquila to care for those injured by the earthquake.

Two other survivors had been pulled out earlier, Sevi said.

Aftershocks heightened anxiety in the area -- including a moderate 5.6 magnitude temblor that struck the area Tuesday, according to the U.S. Geological Survey. Read blog describing the aftershocks

In the village of Onna, 40 people, more than one out of every eight residents in the town of 300, were killed. On some streets, every single home was destroyed.

Resident Anna Rita Difilice lost her 20-year-old son, Fabio, to the quake -- the deadliest to strike Italy in decades and the first major quake in the country in seven years. iReport.com: Waiting to hear from friends in Italy

She said she doesn't know what comes next for her -- her village on Wednesday morning had become populated with tents, cots and stations handing out food, water and other supplies for survivors.

But she said she knew one thing -- she's not going anywhere.

The Italian Red Cross was on the scene at L'Aquila within one hour of the earthquake, said spokesman Eric Porterfield. Among other activities, it set up a field hospital with surgical facilities to ease the burden on local hospitals, he said.

Some of the teams were caring for a dozen orphans from San Gregorio who were evacuated from the orphanage.