(CNN) -- Voting was under way Saturday in Iceland in a general election triggered by the country's financial crisis and the subsequent collapse of the government. 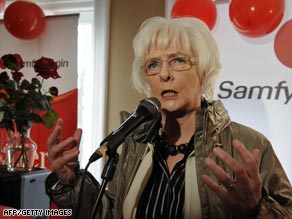 Opinion polls suggest the center-left Social Democratic Alliance, which has headed an interim government since February 1, is on course for an election victory which would give Johanna Sigurdardottir a mandate to continue as prime minister.

Sigurdardottir, the world's first openly gay leader and Iceland's first female premier, has pledged to take the Nordic island into the European Union and to join the euro common currency if elected as a viable way to rescue Iceland's suffering economy.

But that ambition could bring Sigurdardottir into conflict with her party's coalition ally, the Left-Green Movement, headed by Finance Minister Steingrimur Sigfusson, which has proposed a currency union with Norway as an alternative to EU membership.

Victory for Sigurdardottir and the Social Democratic Alliance would mark a change of direction for Iceland, a nation 300,000 people, which has traditionally leaned to the right on political matters.

A poll Friday by state broadcaster RUV and newspaper Morgunbladid suggested Sigurdardottir could pick up nearly 30 percent of the vote, with Sigfusson's Left-Green Movement on 27.2 percent and the Independence Party on 23.6 percent, Reuters.com reported.

The Progressive Party and the Liberal Party -- both already represented in the Althing, the Icelandic parliament -- are also competing along with two parties which are on the ballot for the first time, the Civic Movement and the Democratic Movement.