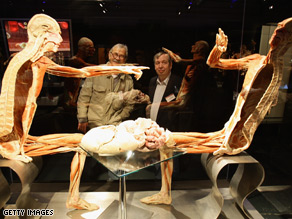 Part of his traveling "Body Works" exhibition, "The Cycle of Life," is showing at Berlin's Postbahnhof and features 200 human bodies at various life stages -- from conception to old age, including embryos and fetuses taken from historic anatomical collections.

In one exhibit a male body is lying on his back with a woman sitting astride him with her back towards his head.

Torsten Woehlert, spokesman for Berlin's Culture Ministry, told CNN that there has already been a number of complaints from the public in the press, though none have come to the ministry itself.

He said: "As it is not against the law, only against good taste, there is not much the government could do anyway."

Conceived by Gunther von Hagens -- dubbed Dr. Death in Germany -- the exhibition displays the bodies with their muscles, nerves and tendons on show using a preservation technique he pioneered called plastination.

On his Web site, the anatomist describes the exhibition's purpose and goal "to reveal and expose the anatomical structure of the human body and its function, in a unique lesson, and to teach us about the complexity of the human body, its anatomy, and the importance of leading a healthy way of life." What do you think?

He added that the source of the exhibition is from donors -- people, who during their lifetime, declared their willingness, by informed consent, to display their bodies at the exhibition for the "benefit of education, health and the awareness of the wide public to the different systems of the human body."

When asked about the coupling of sex and death, von Hagens told Germany's Bild that "death and sex are both taboo topics. I'm bringing them together. Death belongs to life." He added that "without sex no life would exist."

Von Hagens' work has divided opinion in the past, with critics often doubting his scientific motives and accusing him of shocking people to gain publicity.

His public autopsy in 2002 for British broadcaster Channel 4 -- the first in the UK for 170 years -- received hundreds of complaints. The authorities also threatened to arrest him after declaring the procedure illegal.

Von Hagens justified his actions as "demystifying the post mortem examination," and likened the medical profession to "medieval priests who would not allow ordinary people to read the Bible," The New Scientist reported.