WEIMAR, Germany (CNN) -- A long narrow road winds through a thick forest up a hill called the "Ettesberg," on the outskirts of Weimar in central Germany. 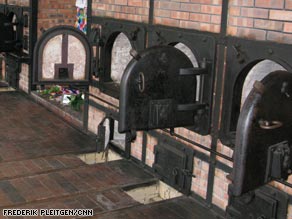 The ovens where tens of thousands of bodies were cremated are restored and working.

The road goes on for miles through the forest, but every once in a while you see an old railway station, a tower, or an old structure withering in the German rain.

This road was named "the trail of blood," by inmates of the infamous concentration camp Buchenwald, because of the death marches they were forced to undertake as they were deported to work as slave laborers for Nazi Germany's defense industry from 1937 to 1945.

"The trail of blood" leads straight to the entrance gate of the former concentration camp -- a structure with a huge iron gate in the middle, a tower with a clock above, and arrest cells in the building's wings.

U.S. troops saw the horror of the Nazi regime first hand when they came through this gate on April 11, 1945, and found camp inmates starved to the bone, many too weak to stand.

"We couldn't even show our joy at this moment, which we had been waiting for so long," said former inmate Zeev Factor, recalling the day American troops came to liberate the camp.

Now the camp is getting ready to host President Obama, who has a special relationship with Buchenwald. His great-uncle Charlie Payne, 84, helped liberate a sub-camp here when he was an infantryman fighting in World War II.

"The survivors see President Obama almost like a grandson of theirs," said the director of the Buchenwald memorial, Volker Knigge, speaking just outside the front gate.

"The president is related to one of the brave men who came here and saw the Nazi horror first hand. The soldiers only had vague knowledge of what concentration camps actually were, but here they saw people too weak to survive, even after having been liberated."

Historians estimate that of the 20,000 inmates who were liberated by U.S. troops, 1,000 died shortly after because of exhaustion and the effects of years of starvation.

It is easy to see why. Every building in the Buchenwald complex radiates death, suffering and evil.

In the crematorium, where tens of thousands of bodies were burned, the ovens have been restored and are fully functional.

In a cellar below the cremation room, meat hooks in the walls were used by SS guards to hang and strangle more than 1,000 inmates, many of them women and children.

Obama will see these testimonies to the barbarism of the Nazis when he takes a tour of the camp with German Chancellor Angela Merkel. He will also meet some of the survivors who Volker Knigge says feel so close to this president.