(CNN) -- Italian Prime Minister Silvio Berlusconi has refuted allegations that he paid prostitutes to attend parties he hosted at his various homes. 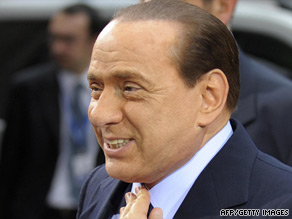 Last month it was announced Silvio Berlusconi and his wife Veronica Lario are to divorce.

In an interview with Italian magazine "Chi," the 72-year old denied he had ever paid for sex.

''I've never paid a woman. I never understood where the satisfaction is when you're missing the pleasure of conquest,'' Berlusconi told Chi.

According to Italian press agency ANSA, Berlusconi accused Patrizia D'Addario -- the woman who alleges she was paid to spend the night with the premier in November -- of being involved in a plan to make up false accusations against him.

D'Addario last week told an Italian newspaper that a local businessman now being probed by magistrates paid her €1,000 ($1,408) to attend a dinner at Berlusconi's Rome residence along with other young women -- what she described as a "harem" -- and she was back a few weeks later to spend the night with the premier, Reuters.com reported.

But Berlusconi told Chi: ''Behind the (investigators') probe in (the southern city of) Bari there's someone who gave Ms D'Addario very detailed and very well paid orders.'" Do you think the allegations against Berlusconi affect his ability to govern?

When asked if he suspected D'Addario was "setting a trap" for him, he replied: 'If I did I'd leap a thousand miles away.''

Berlusconi's private life has been in the spotlight since his wife, filed for divorce in May following reports that her husband went to the birthday party in Naples of an 18-year-old girl. The prime minister denied having an inappropriate relationship with the girl.

Berlusconi and Veronica Lario have been married for 19 years.

Earlier this month, Spanish newspaper El Pais published what it said were five exclusive photographs of racy parties at Berlusconi's villa on the island of Sardinia. The photos, including one which showed scantily clad women, were blocked from use in Italy by a judicial order after Berlusconi complained of an invasion of privacy.

The three-time prime minister's public life has been no less controversial. While campaigning for local elections in Sardinia in January, Berlusconi was asked by reporters to comment about an interior ministry proposal to deploy troops on city streets after a series of sexual assaults on women.

After being accused of ignoring the seriousness of sexual violence, he said he meant his remarks as a "compliment" and noted that "women have to be defended."

In another controversial comment, during the run-up to the 2008 Italian general election, Berlusconi claimed right-wing female politicians were better looking than their left-wing counterparts.

In an interview with CNN recently, the former media tycoon said he now felt his job was a burden.

"I'm still doing everything that I'm doing with a great sense of sacrifice. I have to tell you I don't like it. Absolutely. I would rather be doing what I was doing before or doing something else now," he said.

"I'm here because unfortunately right now Berlusconi is considered the only leader capable of holding the center-right together.