MUNICH, Germany (CNN) -- Juliane Koepcke is not someone you'd expect to attract attention. Plainly dressed and wearing prescription glasses, Koepcke sits behind her desk at the Zoological Center in Munich, Germany, where she's a librarian. 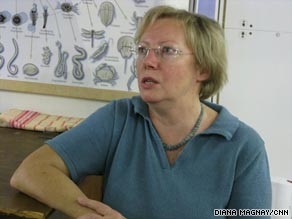 Juliane Koepcke fell more than 3kms after the plane in which she was traveling broke up in midair.

Yet this unassuming middle aged woman has one of the most exciting and unbelievable stories of tragedy and survival to tell.

It was Christmas Eve, 1971, when Koepcke, then aged 17, and her mother boarded a Lockheed Electra turboprop for a flight from Lima, Peru, to Pucallpa in the Amazonian rainforest. Her parents, both famous zoologists, ran a research station in the jungle studying wildlife.

The airline, LANSA, had already lost two aircraft in previous crashes. "We knew the airline had a bad reputation," Koepcke told CNN, "but we desperately wanted to be with my father for Christmas, so we figured it would be alright."

The flight was supposed to last for less than an hour and for the first 25 minutes everything was fine, Koepcke recalled.

"Then we flew into heavy clouds and the plane started shaking. My mother was very nervous. Then to the right we saw a bright flash and the plane went into a nose dive. My mother said, 'This is it!'"

An accident investigation later found that one of the fuel tanks of the Lockheed Electra had been hit by a bolt of lightning which had torn the right wing off.

"We were headed straight down. Christmas presents were flying around the cabin and I could hear people screaming."

As the plane broke into pieces in midair, Koepcke was thrust out into the open air:

"Suddenly there was this amazing silence. The plane was gone. I must have been unconscious and then came to in midair. I was flying, spinning through the air and I could see the forest spinning beneath me."

Then Koepcke lost consciousness again. She fell more than three kilometers (two miles) into the jungle canopy but miraculously survived with only minor injuries. Ninety-one other people aboard Flight 508 died.

Koepcke says she is not a spiritual person and has tried to find logical explanations for why she survived.

"Maybe it was the fact that I was still attached to a whole row of seats," she says. "It was rotating much like the helicopter and that might have slowed the fall. Also, the place I landed had very thick foliage and that might have lessened the impact."

In any case she survived with only minor injuries. Her collarbone was broken, her right eye swollen shut, she was suffering concussion and had large gashes on her arms and legs.

"I didn't wake up until nine o'clock the next morning. I know this because my watch was still working. So I must have been unconscious the whole afternoon and the night. When I came to I was alone, just me ... and my row of seats."

Her ordeal was far from over. Rescue planes and search crews were unable to locate the crash site and Koepcke was stranded in the jungle alone. But she had spent years on the research station with her parents and her father had taught her how to survive in the rainforest -- she knew how to cope in that environment.

The day after the crash she found a creek and started to wade down stream, but it was tough going. The only food she had was some candy she had found at the crash site and her wounds were quickly infested with parasites.

"I had a cut on my arm and after a few days I could feel there was something in it. I took a look and a fly had laid her eggs in the hole. It was full of maggots. I was afraid I would lose my arm. Later, after I was rescued it was treated and more than 50 maggots were found inside. I still wonder how so many maggots could have fitted into that little hole, it was no bigger than a one euro coin."

As she travelled downstream, Koepcke discovered more wreckage from the plane -- and found some of the crash victims.

"I found another row of seats with three dead women still strapped in. They had landed head-first and the impact must have been so hard that they were buried almost two feet into the ground.

"I was horrified -- I didn't want to touch them but I wanted to make sure that my mother wasn't one of them. So I took a stick and knocked a shoe off one of the bodies. The toe nails had nail polish on them and I knew it could not have been my mother because she never used nail polish."

Juliane continued through the rainforest, wading through jungle streams infested with crocodiles, piranhas and devil rays.

"Sometimes I would see a crocodile on the bank and it would start into the water towards me, but I was not afraid. I knew crocodiles don't tend to attack humans."

After 10 days, starved and exhausted, Koepke finally came upon a small boat and a hut on the river. She stayed there, hoping to be rescued. The next day a group of Peruvian lumberjacks found her and brought her to the next town.

She became known as the miracle girl and was hounded by Peruvian media, receiving hundreds of letters from people she had never met before.

"It was so strange," she says, smiling. "Some of the letters were simply addressed 'Juliane -- Peru' but they still all found their way to me."

The events of 1971 still haunt Koepcke and she says the memories are especially clear when she is confronted with airline disasters like last month's Air France crash off the coast of Brazil.

"It just horrifies me. I only hope it all went quickly for those on board."