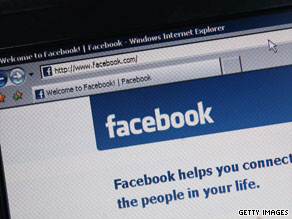 But he insisted that no compromising information had been revealed.

"You know he wears Speedo, swim, swimming, swimsuit... I mean what is that? I mean, that's not a state secret," Miliband said on a BBC Sunday morning talk show.

The man in question, John Sawers, is currently the British ambassador to the United Nations.

His wife posted details about their family, vacations and residence on the social-networking site, British media reported Sunday. Her Web site has since been taken down, reports said. Have you ever posted something you later regretted on a social-networking Web site?

Sawers "was appointed 10 days ago to be the head of MI6," said Miliband, using the common term for the Secret Intelligence Service.

"He is an outstanding professional who will do a really good job in an outstanding organization that does a huge amount for this country," Miliband added. "The fact that there is a picture, the head of MI6 goes swimming. I mean, wow! That really is exciting. It is not a state secret."

But intelligence analyst Glenmore Trenear-Harvey said the leak was at least an embarrassment and possibly much worse.

"Have you ever seen the foreign secretary more embarrassed?" he asked rhetorically.

"The Foreign Office should have made the announcement that no personal details should have been left on any computer or directory," Trenear-Harvey told CNN.

"You could have someone come online and insinuate themselves with Lady Sawers' daughter," who reportedly appeared on the Facebook Web site.

If she shares a computer with her father at home, "the house could pick up a virus, and once that happens we have access to the next chief of the Secret Intelligence Service," the analyst said.

An additional reason for red faces is that Sawers will be in charge of a new British cybersecurity organization when he becomes head of MI6, Trenear-Harvey pointed out.

The new organization, based at GCHQ, another British intelligence agency, will be "charged with making sure that all the intelligence services are not vulnerable to hacking, identity theft, or phishing," Trenear-Harvey said.

This is not the first time a top British intelligence official's personal details have been leaked.

When Richard Dearlove became the head of MI6 in 1999, "his address in Putney was announced," forcing the government to put Special Branch police officers there to protect him, Trenear-Harvey said.

And when Stella Rimington became the first publicly named head of MI5, the domestic security agency, in 1991, her north London address was revealed.

"She and her daughter fled the house and were put into an MI5 safe house," Trenear-Harvey said.

Foreign service officers "are advised to exercise caution" on social-networking Web sites, a Foreign Office representative said, declining to be named, in line with government policy.

Sawers, 53, is a career foreign policy expert. He was a foreign policy adviser to Tony Blair when Blair was prime minister, then became ambassador to Egypt and briefly represented Britain in Iraq. He was political director at the Foreign Office for four years before going to the United Nations in 2007, according to his biography on the Web site of the British mission to the U.N.

He is slated to replace John Scarlett in November as head of MI6.

As chief of SIS, he reports to the foreign secretary, according to the SIS Web site.