(CNN) -- Hundreds of Egyptians took part Monday in the funeral of Marwa Sherbini, an Egyptian woman who was stabbed to death last week in the German city of Dresden in a crime believed to be racially motivated. 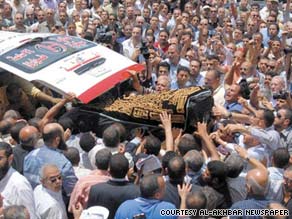 Egyptians take part in the funeral of Marwa Sherbini, who was murdered in Germany last week.

Sherbini, 33, was stabbed to death Wednesday in a courtroom as she prepared to give testimony against a German man of Russian descent whom she had sued for insult and abuse.

The man, identified in German media as Alex A., 28, was convicted of calling Sherbini, who wore a headscarf, "terrorist," "bitch" and "Islamist" when she asked him him to leave a swing for her 3-year-old son Mustafa during an August 2008 visit to a children's park.

He was fined and appealed the ruling. The two were in court Wednesday for that appeal when Alex A. attacked, pulling out a knife and stabbing Sherbini 18 times. He also stabbed her husband three times and attacked another person.

According to Arab media, police officers tried to intervene to end the fight, and a number of shots were fired. One hit the husband, who fell unconscious and is currently in intensive care in the hospital of Dresden University.

Sherbini was three months pregnant at the time of her death.

Many shouted hostile slogans against Germany and called for Egyptian President Hosni Mubarak to take a firm stand on the incident. Egypt's grand mufti, Mohammed Sayyed Tantawi, demanded the severest punishment to be issued against Alex A.

Berlin witnessed angry protests on Saturday, when hundreds of Arabs and Muslims demonstrated after a funeral prayer that called her killing an outrageous racist murder against Muslims.

In a phone call with Al Arabiya, Marwa's brother, Tariq Sherbini, said, "Extremism has no religion. My sister was killed simply because she wore the veil. This incident clearly shows that extremism is not limited to one religion or another and it is not exclusively carried out by Muslims."

"We are only asking for a fair punishment," he said, adding that his sister was not a radical. "She was a religious woman who prayed and wore her headscarf, but she was killed because of her belief."

Anger about Sherbini's death smoldered online, as Twitterers and bloggers pushed the cause.

"She is a victim of hatred and racism," tweeted Ghada Essawy, among many other Arab twitters and bloggers. Essawy called Sherbini "the martyr of the veil."

Various videos circulated on YouTube calling on Egypt to take action and urging Germany to address what their makers saw as a new wave of hatred against Arabs and Muslims in its community.

One video showed various pictures of a young happy Marwa saying that "The woman stood up for her rights and she was killed. May God bless her." The English font in the video presentation asked "when will Egypt cares for its citizens' rights inside Egypt and abroad."

Sherbini and her husband moved to Dresden in 2003, after the husband received a grant to study genetic engineering in the renowned Max Planck Institute. He was scheduled to present his Ph.D. thesis in the coming days.