(CNN) -- The outgoing head of NATO says the organization is as alive and kicking as it has ever been, but will have to adapt to new challenges such as cyber-terrorism and the implications of climate change. 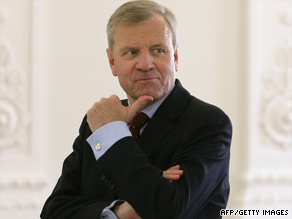 NATO Secretary-General Jaap de Hoop Scheffer steps down from his role on August 1.

As he prepares to leave his post after more than five years in the job, Secretary-General Jaap de Hoop Scheffer told CNN that NATO's operational tempo has never been higher in its 60-year history.

He said: "We have our operations from Afghanistan to Kosovo, to the training of the Iraqi army, to helping the African Union in Darfur, to an anti-terrorism mission in the Mediterranean."

But he stressed NATO's role was not as the "world's policeman," but as one partner among several working together to address global security issues. "Australia is a global partner because Australia is in Afghanistan with over 1,000 soldiers, I have respect for that," he said.

NATO's core mandate of guaranteeing the common security of member states will never change, according to Scheffer. But he said the organization should also continue to focus on a new "strategic concept" which takes into account an increasingly diverse range of potential security threats.

"You cannot deny that the melting of the polar cap, the ice cap on the North Pole is having a lot of security consequences," he said. "You cannot deny that where you needed a tank division at the frontier of a nation only 25-30 years ago, it's now a gas lever which you close. Or it's a cyber attack, where you can totally paralyze a nation.

The threat is growing of cyber attacks that could take down critical national infrastructure systems. Earlier this month, at least 20,000 computers in South Korea were unwittingly co-opted in a cyber attack that Seoul suspected North Korea was responsible for; while two years ago, embedded code was discovered in the U.S. power grid which could have potentially damaged power supplies, two former federal officials told CNN in April.

Despite the seemingly endless number of security threats facing the world, the 61-year old described NATO enlargement as one of the areas of his tenure he was most proud of. He said: "When I came in NATO was 19 allies and I'm leaving after five and a half years with 28. And the open door principle is still very much there, there are nations knocking on NATO's door so enlargement I do consider a success."

He also pointed to the fact that he was able to build a coalition of 43 nations in Afghanistan, despite criticism that some NATO members were not contributing to the effort as much as others. However, he did admit much of his time has been spent "working the phones and working prime ministers and ministers to get more helicopters and transport aircraft."

However he insisted that coalition forces should remain in the country for the foreseeable future, despite comments earlier this week by U.S. Secretary of Defense Robert Gates that U.S. forces must show progress by the summer of 2010 to avoid public perceptions that the war in Afghanistan cannot be won.