LONDON, England (CNN) -- You don't want to monkey around on a blind date, especially if your friends are also taking an interest in the same dark, handsome stranger. 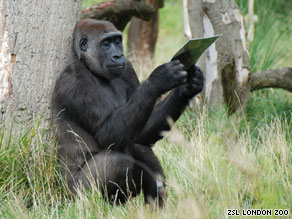 Jookie, as she is known, studies a poster of French gorilla Yeboah, who is heading for London Zoo.

So when three female gorillas at London Zoo heard that they would soon be visited by a brooding French hunk -- well, they went a bit bananas.

The latest development in Anglo-French relations sees Yeboah, a 20-stone 12-year-old, leave his current home at La Boissiere Du Dore Zoo, Pays de la Loire, northwest France and head for the British capital by the end of the year.

There he will be greeted by gorilla trio Zaire, Effie and Mjukuu, who were given posters of their prospective boyfriend for the first time Thursday.

One female gorilla shrieked in delight, while another wedged the poster in a tree to stare at it.

A third, clearly overcome by emotion, held the photo close to her chest -- then ate it.

Their reception was somewhat unsurprising. The zoo has been without a male gorilla since the demise of Bobby, a silverback, in December.

Tracey Lee, team leader at London Zoo, put in a good word for the hirsute lothario on the London Zoo Web site, saying Yeboah is "a very charming, fun loving and intelligent gorilla."

But whom will Yeboah choose to charm first?

Zaire, at 34, is the oldest female gorilla and has been at London Zoo since 1984. The zoo says she's "happiest when she's taking down and rebuilding her nest in various spots around the island. She loves to play with fabric and often drags it around with her all day. "

Then there's Effie, 16, who "enjoys seeing toddlers and often makes her way over to the glass when they come to see her," according to the zoo Web site.

Finally there's 10-year-old Mjukuu, or "Jookie." Dan Simmonds, a keeper at the zoo's Gorilla Kingdom, says she "has this 'butter wouldn't melt look' to her, and she gets away with murder."

"The other two females get along with her very well; she seems to have them all wrapped around her little finger."

Bridget Fallon contributed to this story.